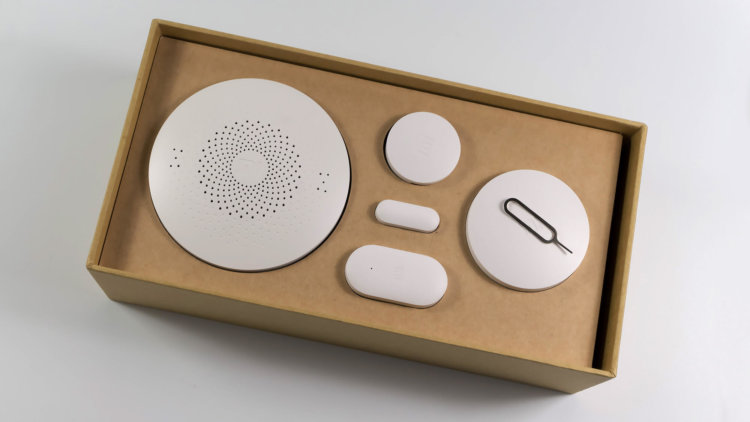 Gone are the days when the "smart home" wassomething unattainable for ordinary people and associated with luxury villas for many millions. Now we are surrounded by clever anything, starting with coffee machines and ending with cat drinkers. But what if you want to automate something yourself and at the same time do not really want to deal with RPI, Arduino, ZigBee and others? Ready-made kits come to the rescue, for example the Xiaomi Smart Home Kit.

The Chinese giant has long established itself inincluding as a manufacturer of home appliances, which does everything from TVs to water filters. Following the trend of the last couple of years, almost all of this electronics can be combined with each other, expanding your ability to manage your home. Sophisticated home appliances, controlled by the Internet, are good, but to build a complete system, simple triggers and sensors are needed, and that’s what the Xiaomi Smart Home Kit contains.

Box - standard for Xiaomi products: brown thick cardboard without any frills, inside - a funny comic with a branded hare in the hat with a hat, showing scenarios for using the set. In the box you will find a hub-lamp, the brain of the whole system, a remote button that acts as a trigger, an opening sensor with a magnet and a reed switch and a motion sensor. Also included is a set of stickies for fixing all devices in the right places and a clip for resetting (this plays an important role in setting up). The kit itself costs only about $ 66, and individual sensors, if necessary, can be purchased for 10–12 dollars.

Please note that the hub plug is designed for Chinese sockets, so you will need an adapter. I did it easier and bought in the same GearBest Xiaomi universal extension cable with USB-connectors.

The first step that needs to be done is to downloadbranded app for smart home, iOS users follow in the App Store, Andriod users google where to download APK. I advise you to immediately log in to the application with your Xiaomi account or have it, if you do not already have one, it will still be required as you work.

The next step is to connect the hub to your Wi-Fi network. Turn it on, and the backlight starts blinking yellow, which means ready to “pair”. Next you need to choose in the application to add a new device and follow the instructions on the screen. The hub periodically tries to tell you something with a voice, but since he speaks excellent Chinese, I could not fully appreciate his efforts.

The brightness of the backlight, its hue and the volume of the hub signals are regulated through the application within very wide limits.

In addition to the "brain" are connected and allthree sensors. If you need to add additional ones, you need to select the appropriate option in the application and, after a request, reset the sensor by inserting the same clip from the set into the hole provided on the case. The devices communicate using the ZigBee HA protocol, although compatibility with devices from other manufacturers is not guaranteed.

By connecting all the necessary sensors, you canget down to creativity. By default, all this is well tuned to the doorbell mode. Press the button, the melodic signal is distributed. There are several other preset configurations: an alarm that triggers a movement or opens a window, an alarm clock that can wake you up in time, and a night light triggered by a motion sensor or a button.

Opportunities increase if you have otherXiaomi devices, for example, you can turn on IP camera recording when an alarm is triggered or, for example, automatically turn off the air freshener if a window is opened. Given the presence of controlled outlets, you can build quite complex systems that cover many scenarios.

Hypothetical setting of all interactionsit is very simple, you choose a sensor and its trigger and attach to it the actions of those devices that can perform them. But here I faced the main problem - all actions and triggers are written in Chinese, and this makes the setup almost impossible. Of course, patient users can compile a list of translated titles, but I gave up.

Smart Home Kit has a number of nice features. For example, you can receive push notifications when certain triggers are triggered, for example, if guests have come to you or are breaking into a house. Another very pleased that the logs of all sensors are saved and can be viewed in the application. Also a nice bonus is the ability to share devices with other people, this is useful, for example, for family use.

In general, Xiaomi Smart Home Kit is simple andconvenient way to automate simple actions in your home. Unfortunately, localization problems spoil the impression of use, but the iOS app and device firmware are updated with enviable regularity, so I hope they fix it.

By the way, the built-in batteries in the sensors will last for 2 years, after which they are easy to replace.

And while I'm going to set up switching on the coffee maker for 3 minutes before the alarm, it was not enough!