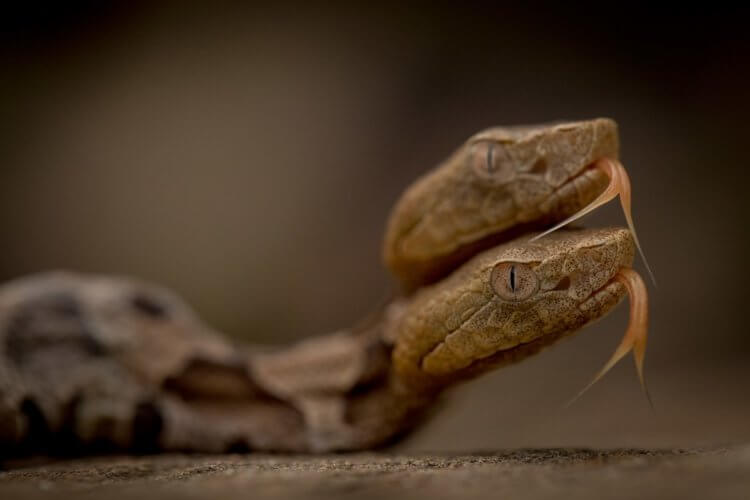 At the end of last summer in Woodbridge, a stateVirginia, a woman went out into the yard and found that a shiny copper head was slowly slipping along her bed. For those places where she lived, it was not so unusual, because in the region there are many snakes, from harmless to poisonous. But this one was different: she had two heads. This phenomenon is called dicephaly. It is rather mysterious and appears in one of every 100,000 snakes born in the wild and one out of 10,000 born in captivity.

Snakes with two heads contain two brains withindividuals, although one head usually dominates the other, which may be lacking in the trachea, esophagus, or even the eyes. Scientists suspect that this occurs in the early stages of embryo development, possibly due to sudden changes in temperature, environmental pollution or inbreeding. Whatever the reason, these unfortunate creatures do not live long. Nearly half die at birth, and few survive after the first few months.

Woodbridge snake (or, ahem, snakes?) was no older than three weeks, but made a fuss. The photos hit Facebook, then CNN, The New York Daily News, and even Snapchat. People who wanted to find out details began calling the local hunting and fishing authorities, curious people who wanted to see the snake up close, and zoos who wanted to take care of them, began to drop by.

“After 48 hours of this madness, I realized that they were cranky,” says state herpetologist John Cleopfer. "I do not know how these celebrities, like the Kardashians, live."

Cleopfer enlisted the help of Cooper Sallade,a respected breeder of vipers in Richmond, who agreed to contain the forked snake on a strictly confidential basis. 27-year-old Sallade has been working with snakes since childhood, ever since he began to catch them on the street and keep them in banks under the bed. Now he has 300 of them, they are contained in lockable temperature-controlled containers on PVC racking systems that look like filing cabinets at first glance.

“Reptiles aren't really my favorite animals,” says Sallade. "I prefer birds and large mammals, but you can't keep a house full of bears."

Sallade placed the fishfish in a food container withdrilled air holes, put it in a wooden box labeled "poisonous snake", screwed it up, and then took it to its object. For the next two and a half months, he kept her in quarantine in a special room with a separate heating, ventilation and air conditioning system to stop the spread of any possible pathogens to other reptiles. The snake did not move and did not eat. Therefore, once a week, Sallade force-fed her with a murdered mouse, gently pressing both heads with a soft sponge and at the same time slowly pushing the rodent with tweezers into a less developed head, which, as it turned out, had the most developed esophagus and respiratory tube. Soon the snake began to defecate and lose skin. Sallade felt hope.

“Because an incomprehensible amount of attention from the media struck the snake, they put a lot of pressure on me to keep me alive,” he says.

But, alas, one December morning, Sallade went in to check her out and found that the snake was dead. He was upset, but not surprised.

“If such a snake were born in my collection, I would not tell anyone about it. Honestly, I would probably have killed her myself, because it would be hard for a snake to live. ”

Would you save the life of the snake or kill it? Tell us in our chat in Telegram.