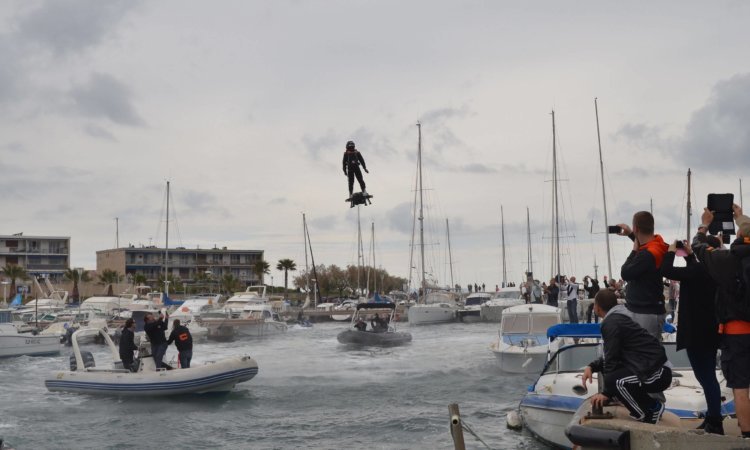 Remember, we recently told you about a hoverboardFlyboard Air, created by talented French athlete and inventor Frankie Zapata? Many people who watched the video where Frankie flew over the water surface on a tiny jet device attached to his legs for a while simply could not believe his eyes. Numerous theories have been put forward that the existence of such a device is simply impossible, and the video is a quality fake. But Zapata not only proved the reality of his development, but also broke the world record for the range of flight on a hoverboard in front of everyone.

And this time the skeptics will just have nothingto object, because Frankie Zapata entered the Guinness Book of Records with his regular flight, under the strict supervision of her official representatives. And it would be quite problematic to falsify or falsify such a thing, would you agree? The crowd of onlookers, who shot everything that happens on their cameras and smartphones, also acknowledged that the hoverboard is more than real. Frankie flew a distance of 2 kilometers 252 meters in 3 minutes 55 seconds on his invention, and this immortalized in the famous book of records. The previous record was only 275 meters. It was installed in 2015 by Canadian inventor Katalin Alexandru Duru.

Among other things, journalists for the first timedemonstrated the Flyboard Air hoverboard near and told something about its design and device. Over the past four years, Frankie Zapata, along with several engineers from his team, worked to create a device capable of lifting a person into the air without using a stream of water, as was the case with the very first Flyboard. Let us remind you that Zapata in 2005 created a flying platform that allowed a person to do incredible acrobatic stunts in the air, thanks to the pressure of water pumped into the platform through a hose by a jet ski pump.

The team has developed several prototypes of the future.Flyboard Air and now, finally, they found one of them to be quite effective and safe for flying. Hoverboard is able to reach speeds of up to 100 kilometers per hour and lift a person to almost any height. True, it is worth remembering that if the hoverboard breaks or something goes wrong, you should have a spare landing plan. That is why Frankie is trying to demonstrate the work of Flyboard Air exclusively over the water, so as not to break if his invention breaks down.

Flyboard Air soars in the air thanks to fourjet engines, each of which has a capacity of 250 horsepower. The fuel supply (in this case, kerosene) is stored in the tank, which is fixed by straps on the pilot's back. The hoverboard is controlled with the help of a remote control inserted into the hand of the pilot, as well as with the help of the platform tilting feet. To keep the entire system in balance helps automatic system of several gyroscopes, working from built-in batteries. Four racks are attached to the platform below, on which they land on a hard surface, and comfortable shoes are mounted on top of it, in which the pilot slips his legs.

Frankie admitted that in the originalthe design had to make a lot of changes. For example, engineers installed two additional motors with propellers for a better control in a hoverboard, since without them it would be very difficult to keep the structure in balance. They are controlled by a special algorithm, so that the pilot does not have to be constantly distracted by the need to stabilize the hoverboard. When developing this system, everything was taken into account, including the speed of a possible head-on or side wind. For a very long time, the system was tested in the workshop of Frankie Zapata, before he decided to embark on his invention and, finally, fly.

Well, it's great that there are in the worldso successful inventors enthusiasts who do not need to be Elon Musk with his enormous fortune in order to soar into the air on a hoverboard just created by himself. What will be the next step Frankie Zapata - he himself has not yet decided, but now you can be 100% sure that his Flyboard Air is the real breakthrough among all the hoverboards that exist today. And all those skeptics who refused to believe in the reality of what they saw in the very first video (we published it last month) will now have to admit their mistake.