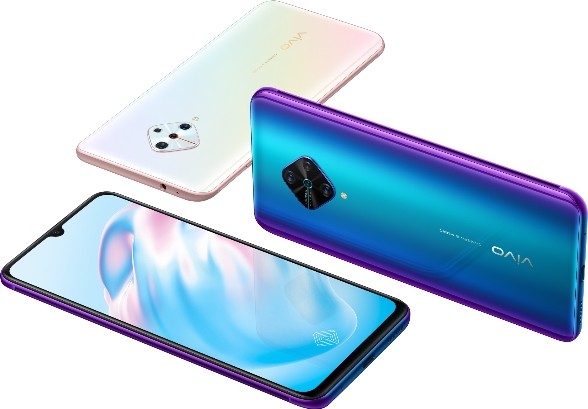 In the Russian market previously announcedVivo V17 smartphone. The device is shown in beautiful pictures, the characteristics are outlined in general terms, so it is already quite clear that this is a serious smartphone. But the announcement itself so far has not happened. It will take place on November 20. Then the price for the Russian market and the start date of sales will be announced.

The idea of ​​the diamond-shaped block of cameras used inintroduced a few days earlier, the Vivo S5 smartphone came in handy here too. The cameras are located a little differently, but the set is the same: a 48-megapixel main camera with an f / 1.8 aperture, 8 MP wide-angle (120 degrees), a module for shooting macro (focuses from a distance of 4 cm) and an additional camera for calculating the depth of field. The front camera also has not changed - the same 32 MP, but it is no longer located in a round window, but in a drop-shaped cut-out of the screen.

Screen sizes are not specified. Probably about 6.5 ″. The matrix is ​​definitely AMOLED, since a fingerprint scanner is built into the screen.

The battery has an impressive capacity of 4500 mAh. Charges, thanks to technology of double fast charging, with “amazing speed”. Details of what exactly is meant by that will appear later. Charging slot - balanced Type-C.

The chipset is decent, Qualcomm Snapdragon 665, a lot of memory - 8 GB of RAM, 128 GB of internal flash, and even expandable (supported memory cards up to 256 GB).

A certain game center will help the user betterunderstand the capabilities of the device in this regard: you can monitor in real time the operation of the central and graphic processors, as well as the temperature of the smartphone. To enhance the immersive effect in games in Ultra Game Mode, messages and notifications are blocked.

There is an invitation to subscribe to receive a gift for pre-order in the official store.