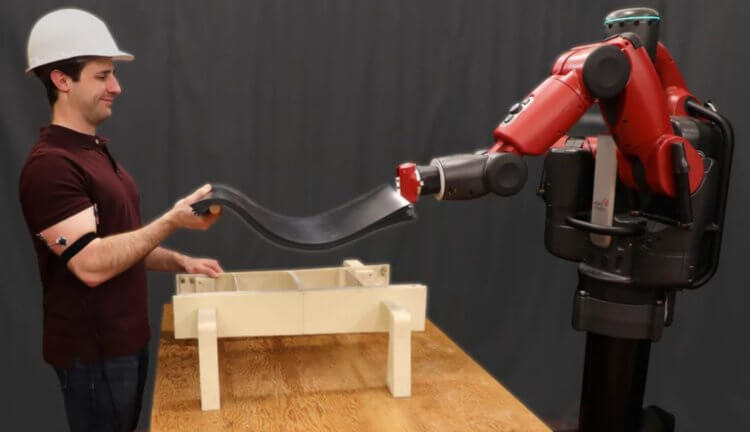 Industrial robots do their job welltasks if given specific instructions. However, according to researchers from the Massachusetts Institute, they would be able to become even better and turn into a full-fledged part of the working team, if they could recognize the movements of people. To verify this or not, they developed a special robotic arm that does the work, guided by the movements of their human colleague. Well, there really is something in it!

The system was named RoboRaise and wasBuilt into the already existing Baxter robot. To complete its work, it took sensors that are attached to the arm of a human colleague and read electrical signals from the muscles when the arm goes up or down. This data is sent to RoboRaise in the form of control commands, and the robot repeats human movements with an accuracy of several centimeters.

The development team tested the effectiveness ofsystems, allowing the robot to lift flexible objects with the person. Thanks to the joint work, they were able to assemble several components of the aircraft - the accuracy of movements of Baxter was about 70%.

According to study co-author JosephDelPreto, they want the human and the robot to copy each other's movements and make useful adjustments to complete the task as well as possible. To give the robot a command to raise an object higher or lower, a person needs only a few cycles of tension and relaxation of muscles.

Developers, of course, do not wantstop there In the future, they intend to attach more sensors to the human hand so that they can read out even human fatigue and give the robot a command to increase the lifting force in order to relieve the load from their colleagues.

Doubt that all the hard work in the futurewill perform robots, there are fewer. One has only to look at the Boston Dynamics Handle robot - they are already doing an excellent job with dragging heavy boxes.

You can discuss the new robot in the comments, or in our Telegram-chat. There you will definitely find someone to talk about topics that interest you!