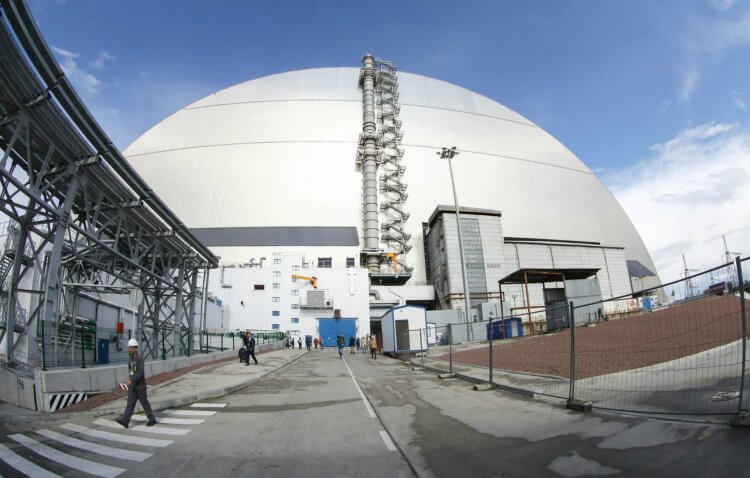 Above the building of the 4th power unit of the Chernobyl nuclear power plant,suffered as a result of the largest catastrophe in the history of atomic energy, a new protective structure was built and put into operation. It was called the New Safe Confinement. The object covered an obsolete sarcophagus "Shelter", which was erected immediately after the disaster in 1986. It was assumed that the old sarcophagus will be able to serve from 20 to 40 years.

The main disadvantage of the old building was its leakage: the total area of ​​the cracks reaches 1 thousand square meters. The level of radiation under the old sarcophagus exceeds the lethal dose by 20 times.

See also: The most radioactive place on Earth. And this is not Chernobyl

It was impossible to repair the old sarcophagus. As a result, it was decided to build a new protective dome.

The contract for the construction of a “new safe confinement” was signed in 2007. But the delivery of the object was postponed several times.

Construction and installation of a new facility occupied12 years. The total cost of the project was more than 2 billion euros. The main amount of 1.4 billion euros was collected by more than 40 countries of the European Union. A financial contribution of 55 million euros was made by Russia.

New sarcophagus - the largest in the history of mobileconstruction Made in the form of an arch, whose height is 110 meters, width - 257 meters, and length - 165 meters. The weight of the structure exceeds 36,000 tons.

Due to the large size of the arch, it had to be builtin two parts and then move them together. The installation of the object was carried out using a special system, which consists of 224 hydraulic jacks and allows you to move the structure to a distance of 60 cm in one cycle. It took several weeks to move the structures together.

Recently, foreign journalists have been inside the new sarcophagus. Looks like a new building from the inside, you can see in the video below.

By July of this year, the test operation of the new facility was completed. As indicated, the new sarcophagus should protect the emergency unit from radiation emissions for at least 100 years.