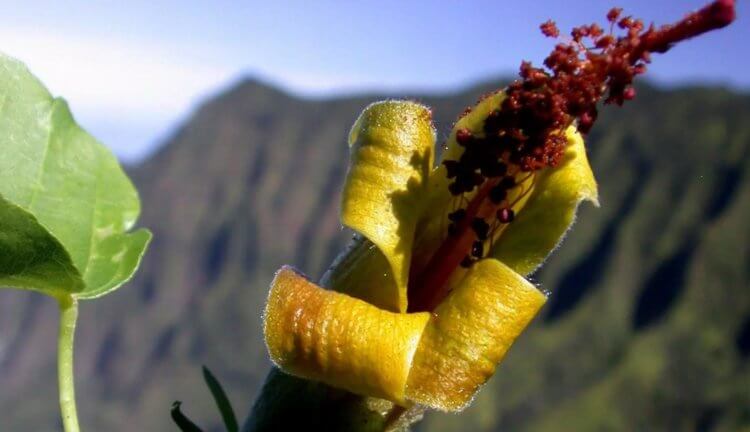 In 1991, on a cliff on a Hawaiian islandKauai was found an extremely rare type of hibiscus called Hibiscadelphus woodii. Then only four groups of plants were discovered, three of which were subsequently crushed by cobblestones falling from a cliff. The plant was last seen alive in 2009, and seven years later it was officially declared extinct. It turned out that in vain - during a fly-around of the Kalalau valley, researchers managed to find one of the surviving plants. The video published by nerds is recommended to be viewed by everyone - the opening views are unlikely to leave anyone indifferent.

The remote part of the Kalalau Valley, whichconsidered the only place where this type of hibiscus can grow, consists of many vertical rocks. It’s impossible to climb animals or people on most of its cliffs, so botanists actively use drones with built-in cameras to explore its surroundings. Their interest is well founded, because the area of ​​these rocks is considered a hot spot for the biological diversity of the Hawaiian Islands.

The newly opened Hibiscadelphus woodii grows ina bush up to five meters tall and gives bright yellow flowers that eventually turn purple-maroon. They are rich in nectar and, probably, pollinated by local birds - Hawaiian crests. It seems that pollination occurs extremely badly, and even botanists cannot reproduce the plant - even cross-pollination with a related species did not produce a result.

Basically their growth is hampered by falling from the rocks.boulders, as well as invasive plants. The new discovery gives hope that the endangered species can still grow in hard-to-reach places. It also once again proved the usefulness of drones - if it were not for them, it would be extremely difficult and expensive to study the vegetation on the vertical cliffs of the Hawaiian islands.

Did the sight of the vertical rocks impress you? Feel free to share your opinion in the comments, and do not forget to join our Telegram channel, where, in addition to news announcements, entertainment content is published!