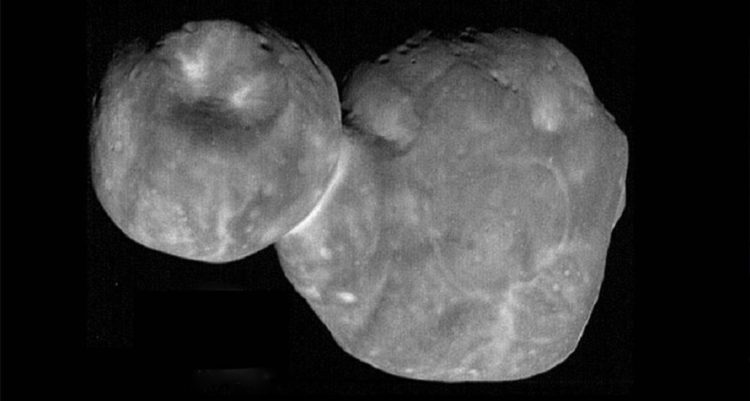 The story of Ultima Thule can be written in totalof its parts. A new analysis suggests that this tiny cosmic stone was formed from a rotating cloud of even smaller stones, which eventually formed two separate objects. These objects then gently converged in the early days of the solar system and created a distant world of two lobes, which is studied according to the results of the analysis past the flying probe “New Horizons”.

NASA probe skirted Ultim Thule (officialTitle MU69) January 1st. The first images sent by the spacecraft showed us an object in the shape of a snowman with Ultima’s body and Tula’s head. But subsequent images have shown that these shares are more like hamburgers than snowballs.

The first geological map of the cosmic stonecan help explain this plane. The map shows distinct mounds on both lobes, the boundaries of which are still visible today, said planet scientist Jeff Moore from the NASA Ames Research Center in Moffett Field, California. His colleagues believe that these mounds are small or medium pebbles, which are organized into a rotating disk, and then merged into two separate lobes, which subsequently stuck together. This rotation could smooth the material in the lobe. The disk was spinning and we got the shape of a hamburger, says Moore.

Planetologist William McKinnon ofWashington University in St. Louis, however, adding that "this has not been proven." Mackinnon also presented a computer simulation of the final collision between Ultima and Tule, which showed that the fragments were moving at a speed of 2 meters per second when they collided. Approximately as a person walking into the wall in quick steps.

This is a soft collision, as well as a body.Frankenstein suggests that planetesimals like Ultima Thule are formed from clouds of dust and stones stuck together under the action of their own gravity. Before the New Horizons, it was not clear whether these protoplanets were formed from collapsing clouds or from small stones slowly sticking together to form larger stones over time.

Funny shape, isn't it? Let's discuss in our chat in Telegram.