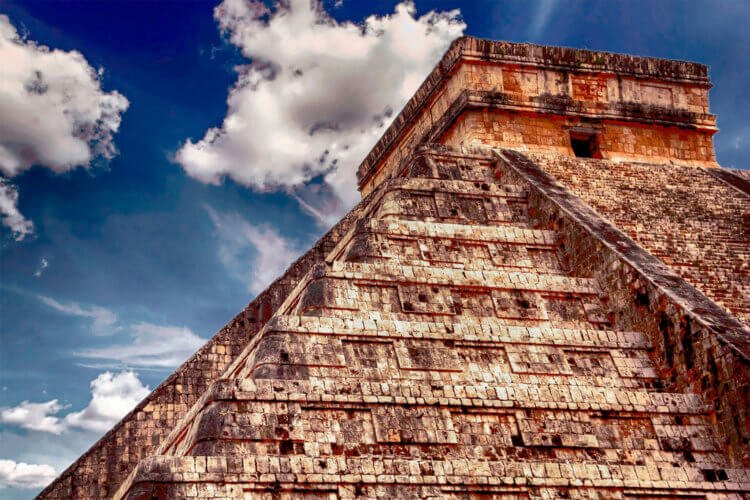 Fifteen centuries ago, the volcano Ilopangoerupted, forming a caldera in what is now El Salvador. It was one of the largest eruptions in human history. More than 40 cubic kilometers of pumice and ash were released into the atmosphere. This is about 100 times more than at the time of the eruption of Mount St. Helens in 1980. It is believed that this release led to a temporary cooling in the entire Northern Hemisphere of the Earth. For a long time, scientists assumed that the eruption was one of the reasons for the death of the Mayan civilization, which flourished in Mexico and Central America. However, a new study showed that the eruption did not lead to the death of civilization, at least in those areas that were located 40 kilometers from the caldera. Moreover, the Maya quickly returned to lifeless territory and even built a pyramid - a monumental structure that has survived to this day.

In response to the eruption of the Mayan volcano, a huge pyramid was built

Mayan civilization continued to exist after the volcanic eruption

Events such as eruptions and droughts are considereda major factor in the decline of ancient civilizations. But, according to Akira Ichikawa, a researcher at the University of Colorado at Boulder, recent research indicates that ancient humans were more resilient, flexible, and innovative than is commonly believed.

Caldera of the Ilopango volcano, which was believed to have destroyed the Mayan civilization

Ichikawa excavated an ancient Mayan citySan Andres, exploring the structure known as the Campana pyramid. This, of course, is not the largest Mayan structure. Earlier we talked about a more massive and ancient structure. Nevertheless, the pyramid became the largest structure in the Zapotitan Valley at that time. Its total volume was 33,000 cubic meters. The height of the pyramid is about 13 meters, and the width of the base is 40 meters. Details of the study are published in the journal Antiquity.

When the team dug several trenches alongwalls, they found eight layers of building materials, consisting of stone and soil. But then the find surprised them - they stumbled upon a five-meter layer of pure white tephra, that is, the material that is formed during a volcanic release. Then the researchers carried out radiocarbon analysis, which showed that construction began five years after the eruption. This suggests that the Maya quickly returned to their territory after the disaster.

The Mayans began building the pyramid just five years after the disaster.

I must say that earlier scientists arguedregarding the exact date of the eruption. The ejection was believed to have occurred between 270 and 400 AD. But radiocarbon analysis showed that the disaster happened in 539.

How and why the Maya built the pyramid

Mesoamerican cultures considered volcanoessacred. According to the researchers, perhaps the Maya believed that the erection of a monumental structure from volcanic material would help solve the problems of possible future eruptions.

It should be noted that not only the Maya worshipedvolcanoes. According to Mark Elson, assistant professor of anthropology at the University of Arizona, corn cobs were found in black basalt near Sunset Crater Volcano in Arizona, which erupted around 1085. Most likely, the corn was left as an offering that was made to the lava flow. This is how the Hopi people tried to control the volcano.

But the use of tephra in the construction of the pyramidcould be dictated not only by religious considerations, but also by practical as well as functional. Explosive tephra is still used today as a building material because of its excellent thermal insulation properties.

Volcanic tephra was used to build the Mayan pyramid

In addition, the builders may have decideduse tephra because of its white color. Catherine Reese-Taylor, an archaeologist and professor at the University of Calgary, speaks about it. Color, most likely, also had some meaning for the Maya.

It is not yet clear how many people were involvedconstruction. Ichikawa estimates that it would take a minimum of 13 years for a hundred builders to work four months a year. If 1,500 workers were involved in the construction, they would have erected the pyramid in just 11 months. At the same time, it is not yet clear how the workers obtained food and whether they built the pyramid at the direction of local rulers or by themselves as a religious tribute. Scientists hope that it will be possible to find out in the course of further research.

Subscribe to us at Pulse Mail.ru, where we publish even more fascinating materials about archaeological finds and discoveries.

As scientists say, the study of Mayan villagesis an important addition to the meager amount of research in an under-explored region. Volcanic eruptions in the area have occurred regularly. Obviously, the Maya possessed a certain resilience that allowed them to rebuild their villages from the ruins. They were forced to leave the territory only for more serious reasons than a volcanic eruption.

According to researchers, such a largeconstruction united society, and also allowed and strengthened the power of the elite that organized it. It is quite possible that during the construction the society decided on the government.