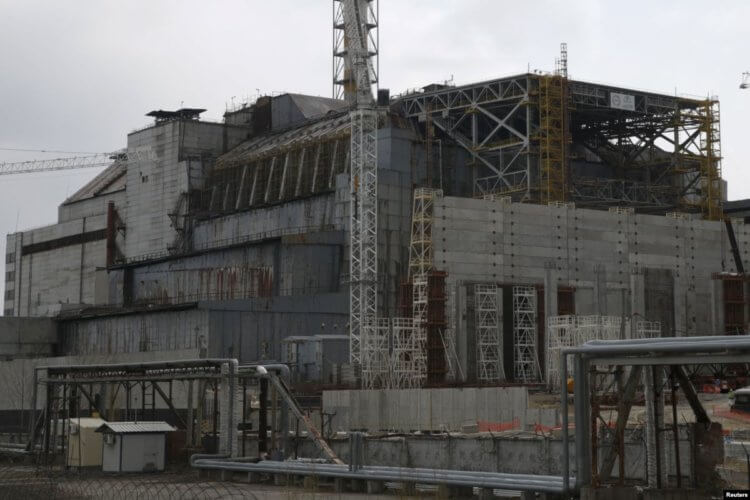 In 1986, over the 4th exploded reactorthe power unit of the Chernobyl nuclear power plant was installed protective structure "Shelter-1". The design, the creation of which required 400 thousand cubic meters of concrete and more than 7 thousand tons of steel, was not as reliable as promised. Numerous cracks, rickety concrete slabs and high levels of radiation inside increased the risks of a new release of radioactive substances. Over the "Shelter-1", popularly called the "sarcophagus", a new structure was installed, called the "New Safe Confinement" (NSC). Its development and construction was carried out for 12 years.

Under the old sarcophagus is the samethe unfortunate 4 reactor that exploded, as well as a huge amount of various radioactive substances and debris that were dumped by the liquidators of the accident from the roof of a nearby nuclear power plant building.

Read also: Inside the new sarcophagus of the Chernobyl nuclear power plant

The probability of destruction of the old sarcophagusmeans that the multi-ton plates covering the reactor can fall onto the reactor and take up radioactive substances into the air, which will settle on the inner walls of the NSC's new arched defense structure, turning everything inside into a huge radiation source. Fonit will even be outside the new protective structure. Under the old sarcophagus is a huge amount of radioactive materials that are mixed with concrete, sand and other substances that were used to liquidate the accident. Without the disposal and disposal of these substances, they will constantly pose a danger to people who work at the station.

The task was proposed to be solved in two ways: reinforce or dismantle dangerous and unstable structures. As a result, we chose the second option. However, such an idea did not find support among some experts. They note that it will be impossible to dismantle the Shelter-1 object, since people must be inside the NSC, and when disassembling the sarcophagus, radioactive dust will rise into the air. The work really has to be very difficult and dangerous. Much of the project is still unclear. But some details about him are already known.

Inside the new secure confinement

Recently, a contract was signed with a contractor to develop a project for dismantling the old sarcophagus. It is assumed that the work will be carried out in three stages.

During the first and second stages, engineers will appreciatecurrent state of Shelter-1. In addition, it is planned to carry out design work to understand exactly what equipment will be needed to disassemble the old sarcophagus, to work with large volumes of radioactive waste. In addition, work will be carried out to ensure maximum safety for the people who will work at the facility. According to available data, human involvement is expected to be minimized.

The third stage will be the most difficult. In the course of it, they will purchase equipment necessary for disassembling the sarcophagus, transporting the disassembled parts and actually begin dismantling. The work will be complicated by the fact that some parts of the sarcophagus for 30 years were exposed not only to radiation, but also to natural corrosion - they decayed. The dismantling of each individual part of the sarcophagus will increase the risk of collapse of the entire structure. Therefore, engineers have to solve the problem of how to strengthen each remaining element of the sarcophagus.

For dismantling heavy multi-ton concrete slabs andmetal structures, it is planned to use four special cranes with a lifting capacity of 50 tons each. They were installed during the construction of the new NSC protective structure. Their control will be carried out by a human operator remotely.

Also interesting: How much was the Chernobyl accident worse than other accidents at nuclear power plants?

In addition, inside the new building is locatedseveral mobile platforms equipped with robotic manipulators. Each of them is equipped with the necessary tools for dismantling (cutting, crushing) and transferring parts of disassembled structures. In addition, various mounted manipulators are already provided that will allow you to efficiently and accurately disassemble the sarcophagus. In other words, inside the new NSC there is already a part of the technique that will allow to exclude the presence of a person next to the old sarcophagus in the process of disassembling it.

You can see how the process of disassembling the sarcophagus is supposed to look in the video below. It is in Ukrainian. Russian subtitles available.

How to solve the radiation problem

When disassembling the sarcophagus, there will certainly bedust accumulated on its walls and roof containing radioactive particles. However, according to the deputy technical director for safety at the Chernobyl nuclear power plant, Alexander Novikov, these emissions can be minimized. A special system is used inside the shelter, which sprayes a special solution that attracts radioactive particles to itself, preventing them from moving freely under the sarcophagus. Novikov points out that even if the sarcophagus is destroyed, only a small amount of dust can come out of it. But to quickly clean the sarcophagus area, most likely, a closed ventilation system installed during the construction of the NSC will be used. In addition, other disinfection systems are likely to be used, which will be created in preparation for dismantling.

The dismantled parts are planned to be stored inseparate technological room of a new protective structure. There they will carry out work on crushing parts into smaller fragments, which, having placed them in airtight containers, will be sent for burial.

It is assumed that all the dismantling of the old sarcophagus should be completed by December 20, 2023.