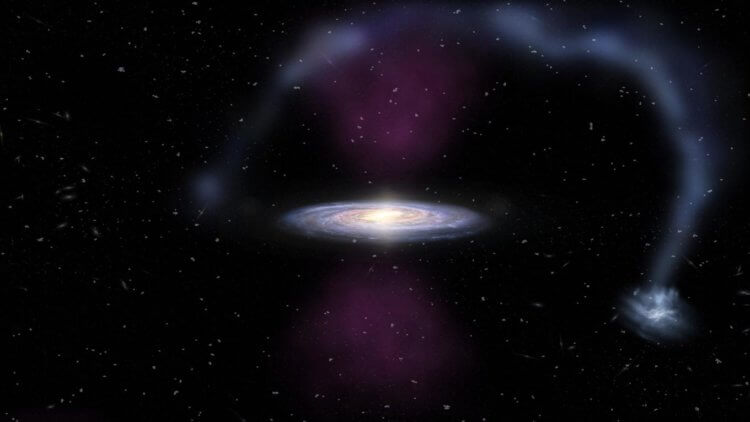 Not so long ago, scientists believed that a black hole inthe center of the Milky Way, by cosmic standards, behaves quite calmly. However, a new study, which will soon be published in the Astrophysical Journal, refers to a titanically expanding beam of energy that burst out of a black hole in the center of our galaxy 3.5 million years ago, sending a cone-shaped burst of radiation through both poles of the galaxy and into outer space . Experts believe that the mysterious Fermi bubbles are large structures that are located above and below the center of the galaxy and are traces of this ancient explosion.

Trace from the explosion that occurred 3.5 million years ago

What is a Seyfert flash?

As you know, the Milky Way galaxy is spiral. At the same time, about 1% of all spiral galaxies observed by astronomers have an extremely active core of a rather large mass. From time to time, this core throws out a large amount of gas into space at great speed. Such outbursts are accompanied by a sharp increase in the brightness of the black hole and are called Seyfert flashes, and galaxies, in turn, are Seyfert galaxies.

In a recent study, Australian andAmerican scientists led by Professor Joss Bland-Hawthorne from the University of Sydney found that 3.5 million years ago, the outbreak in the center of the Milky Way was so powerful that it affected the Magellanic Stream - a long gas trail stretching from nearby dwarf galaxies called the Big and Small Magellanic Clouds. Magellanic Stream is located 200,000 light-years from the Milky Way.

What other secrets do our galaxies conceal? Let's discuss this with the participants in our Telegram chat.

According to experts, the explosion was toostrong to provoke anything other than nuclear activity associated with a black hole in the center of the Milky Way, known as Sagittarius A *. Recall that the mass of Sagittarius A * is 4.2 million times the mass of the Sun. Conclusions have been drawn, among other things, thanks to data obtained by the Hubble Space Telescope.

Ray of light in the dark

A powerful explosion of energy and radiation came straight fromcenter of the galaxy in the surrounding space. This shows that the center of the Milky Way is a much more dynamic place than scientists previously thought. Moreover, by galactic standards, the explosion occurred recently. And indeed, 3.5 million years ago on our planet, Australopithecans roamed around Africa with might and main.

The artist's impression of massive bursts of ionizing radiation bursting from the center of the Milky Way and affecting the Magellanic Stream. Posted by James Josephides / ASTRO 3D

The preprint of the study is available on the site.University of Sydney. The results, according to experts, change our understanding of the Milky Way. In the past, astronomers considered our galaxy inactive with a not-so-bright center. Now, the results have opened up the possibility of a complete rethinking of its evolution and nature.

To keep abreast of the latest scientific discoveries, subscribe to our news channel on Telegram.

Another important component of the studyis the fact that scientists still have a lot to learn about the black hole in the center of the Milky Way. After all, how black holes develop, affect galaxies and interact with them is an outstanding problem of modern astrophysics.