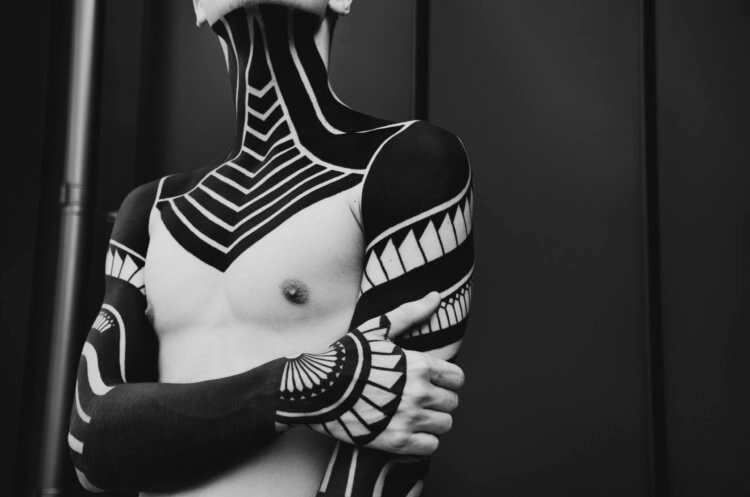 Thousands of years ago, tattoos were used by people.to emphasize their social status and protection from evil spirits. Now, each person puts his own meaning in the drawings on his body, reflecting through them his own worldview, his own character traits and his love for someone. It seems that in the near future tattoos will begin to provide others and even the owner with even more information - for example, to notify about the exacerbation of chronic diseases. Perhaps the drawings on the body will save the lives of their owners.

Typically, tattoo ink consists ofsoot of animal bones, wood resin and a variety of chemical compounds, the concentration of which determines the color of the paint. In order to make tattoos on the body of a person be able to warn about the exacerbation of chronic diseases, scientists suggest replacing ordinary inks with those that change color when the level of various substances in the human body changes.

The basis of this ink are the so-calledacid-baseline indicators. Practically each of us knows what it is - in chemistry classes we used strips of paper soaked in them, which, when placed in different solutions, changed their color depending on their acidity level. By adding these substances to the ink, scientists were able to make the paint change its color with increasing glucose levels, which is important for people with diabetes. Other inks reacted to changes in albumin protein levels, which can tell about the state of the liver.

Remember these indicators from chemistry lessons?

Tattoos with a new type of ink were applied topig skin, which is very close in structure to human. The paint was introduced using a special machine into the dermal layer called the dermis - it is there that the paint penetrates and when applying conventional tattoos.

The structure of human skin

The ink created by scientists was yellow and theyreacted to changes in the body of the pig in different ways. Thus, with an increase in glucose level, one tattoo became dark green, and another tattoo, when the albumin protein level was changed, acquired a light green tint. Owners of such tattoos can quickly learn about the increase in blood sugar levels, or about the malfunction of the liver or kidneys.

Change the color of the tattoo with an increase in acidity, glucose and albumin

So that people can recognize changes accurately.tattoo colors, the researchers have developed a special application for smartphones. To find out about the state of their health, future owners of chameleon tattoos will only need to point the camera of their mobile device at them.

Scientists intend to improve technology and createink, which can warn about the appearance in the human body of viruses that can cause the development of dangerous diseases. If the dyes created by scientists prove their safety, changing the color of the tattoo can be a durable tool for monitoring the health of patients.

This is interesting: A smart tattoo will measure blood sugar

Of course, technology cannot be called cheap -the price of tattoos depends on the complexity of the pattern and can reach several tens of thousands of rubles. Today, masters use very expensive equipment, which also increases the cost of tattoos. But in ancient times, drawing pictures on the body was hardly worth any money, because the paint was almost completely made of soot, and for its introduction under the skin was used a rough instrument of two cactus spines.