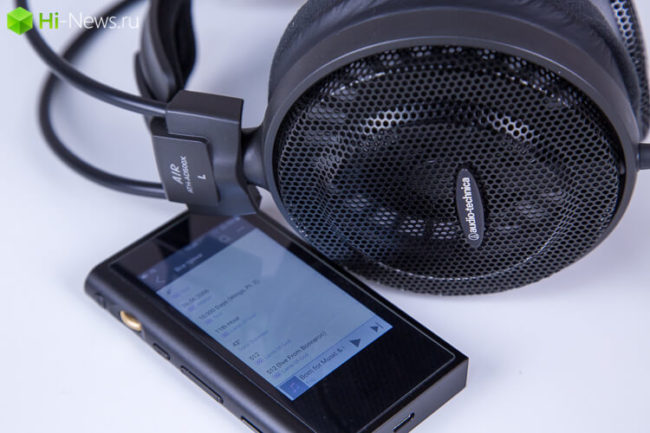 The range of headphones of the Japanese companyAudio-Technica can surprise even the most experienced audiophile: in the Hi-Fi category alone, the manufacturer offers more than 10 different models. Many of Audio-Technica’s full-size wired headphones belong to the special AD series, and the initial version here is the ATH-AD500X, which we tested.

The very abbreviation AD stands for AirDynamic, that is, all headphones line have an open acoustic design. At the same time, the matter is not only in appearance but also in sound: the AD models differ from the rest with spacious and “airy” sound, which was made possible by drivers with voice coils with an aluminum core with copper coating (CCAW) and an open acoustic design.

The ATH-AD500X has 53mm drivers. Yes, a larger diameter increases the mass (and what's the difference if it is a headphone for home use) and forces you to use more rigid materials to reduce distortion due to deformation of the radiating surface (not to mention the high requirements for the amplifier), but it is the increased driver that produces characteristic of the headphones AD-series sound. By the way, some internal elements can even be made out through the grille: the diaphragms with straight holes are covered behind with metal deflectors. If you look at the other side, you will notice that the driver is located at a certain angle to the frame. Why is this done? As a rule, to expand the audible sound space, but there is also an opinion that such a construction forms a three-dimensional sound stage.

Headband mechanism - branded 3D Wing fromAudio-Technica. The design is made in the form of two elastic metal arcs (light aluminum body), dressed in a plastic tube. It does not require adjustment for a specific head (two “pillows” play a role), the headphones sit very comfortably, because they exert minimal pressure. Yes, with the active movement of the head, the cups begin to crawl down, but this is clearly not a headset for running, is it?

Headphone cups, like the cups themselves,made of black plastic. The ear cushions of the ATH-AD500X are trimmed with velor, while the part that serves to fasten the pillows to the cases is made of thin artificial leather. Damping fabric gasket is an integral part of them, so it will not be possible to replace them separately. How long will such material last? As a rule, it will be possible to forget about the problems for a couple of years, and there it will not be difficult to find a replacement.

Fixed oxygen free copper cableunilateral. You can treat this differently: yes, it is easier to replace the detachable cable. BUT! Audio-Technica makes very high-quality wires that do not require updating even after several years of operation, especially when it comes to the device that is used at home or in the studio. Yes, and do not need to be reminded that unnecessary contacts are a source of potential problems. I remember many manufacturers have already suffered because of trouble with connectors.

By the way, a nice bonus in the kit - gold plated6.3 mm adapter The piece is useful, although the 3.5 mm plug does not have a thread for fixing it. However, if you do not try to pull out the cable with your foot, it will remain in the socket.

Of course, the main thing in these headphones is notappearance (you are unlikely to find yourself in them on the subway, on a noisy street or on an airplane), and the sound. Let's go over the specifications and sort everything out in order.

Like the older models of the AD-series, ATH-AD500Xdiffer very free and atmospheric sound. The space these headphones draw very well, sometimes the sound even seems too light, although the dynamism and mobility it does not occupy.

Bass a lot, but without fanaticism. There is a little lack of upper middle and upper frequencies, which slightly narrows the number of supported genres, but the bass compositions and metal come to a bang. Vocals and guitars sound brighter and more discriminating, the same can be said about dance music. On the whole, the model sounds very vigorous - you can safely recommend it for driving genres (leave some things like ATH-AD900X sitting around the fireplace).

It should be noted that the ATH-AD500X is noticeablereduces the "dirt" of the source. We first tried to listen to these headphones with the iPhone XR and Google Pixel 2 and were pleasantly surprised that even with the help of streaming services on a smartphone, you can enjoy listening to music on this device. For a long background listening during some not too important things - the most it.

Then in the course went heavy artillery in the form of FiiOM9: Exynos 7270, a little less than a gigabyte of RAM, about two gigabytes of ROM, a touchscreen from LG, a Bluetooth module with support for all imaginable codecs. The solution already tested by the company is responsible for the sound part in this model: a pair of AK4490EN and a balanced amplifier based on OPA-shek. Signal decoding is performed by “specially trained” FPGA-scale.

Do I have to say that with the player immediately manifestedbest quality output. The sound has become more transparent and realistic, albeit without the staggering effect of being in a studio or at a concert. The fifth violinist in the third row cannot be heard, but it is not necessary: ​​on dynamic recordings with dense sound, the headphones are 100% fulfilled.

If you use these headphones for the intended purpose,here you can not do without a home speaker system (well, or a computer with an amplifier). We took for testing Yulong DA9 and Resonessence Labs Concero HP as a DAC and amplifier. In the first case, it was clearly noticeable that some RF was added in order to ensure the supply closer to neutral. In the second - DAC was pleased with his unpretentiousness. Listening to sound with any sampling rate and bit depth, as well as new-fashioned DSD records, turned out to be for him. Having control over the bass, it became much easier to tune the composition “for yourself”, while the middle frequencies remain dense, and the high frequencies - the same crystal.

So use an ATH-AD500X with an amplifier orA home speaker system is a must have if you want to unlock their full potential. In extreme cases, you can do with the player. As for the smartphone ... better to forget about it. These are definitely not headphones for driving to the subway.

Perhaps the ATH-AD500X is a great example of howneed to implement an open design in the headphones. Large 53-mm speakers allowed to unlock the potential well, and a comfortable mount contributes to long-term listening to music. And the price of 11,000 rubles is quite adequate for such a device, since here it is determined not by the steepness of the components and the cost of the materials, but by the work of the developers who set up the whole system. And the result is really worth it.