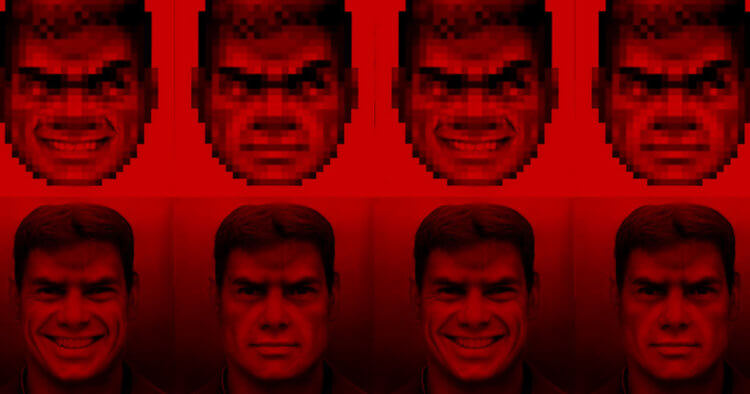 Recently we were shown a "remake" of a classic1997 quake II shooter, where the main work on the improvement was reduced to the integration of ray tracing technology, but this time something more interesting appeared on the Web. Finally, the HD remake that we all waited for! One of the users of Reddit, using a set of several neural networks, was able to turn the pixelated image of the space infantryman's face from the classic shooter of 1993, Doom, into an almost photorealistic image.

According to Futurism portal, as a result, after all the manipulations, the face of the famous “Doom guy” began to look like a muscular version of actor Nathan Fillion.

As explained by the source, the final resultis a product of the work of several generative adversary networks (GAN). These are machine learning algorithms built on a combination of two neural networks, one of which generates samples, and the other tries to distinguish the correct (“authentic”) samples from the wrong ones. There are a lot of perspectives in this technology, which we wrote about in one of our previous articles.

The enthusiast who created these images firstmissed the Doom Guy's sprite face through several photo editing programs (FaceApp, Waifu2x, and GIMP). The result, although it turned out to be significantly better than the original image, was still too pixelated.

Transitional result. The image of the face has changed noticeably, but it still remains unreal

Further work was carried out usingNVIDIA's StyleGAN Generative-Competitive Network. It is able to generate faces (not only faces, but also inanimate objects) that have never existed and at the moment it is one of the most powerful models of the generative-adversarial neural network, which shows impressive visible results. To consolidate the results, he missed the resulting face through StyleGAN again. Since the original image of the face had unrealistic proportions, the final touches and “smoothing the corners” had to be done manually.

After processing by GAN technology, but before editing manually