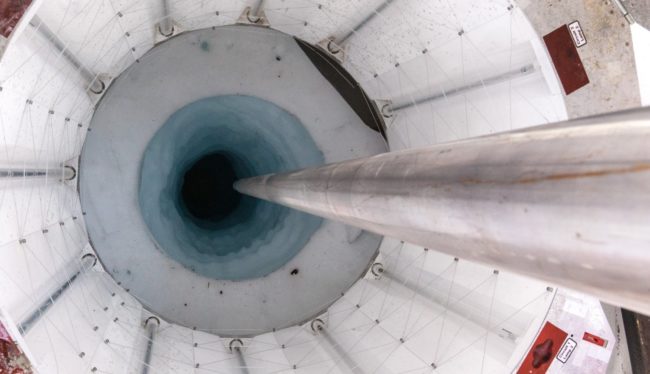 Unlock the secrets that hides the history of the planetEarth, can only work a variety of research groups. Each of them is engaged in his own business - for example, the SALSA team carefully studies the lakes hidden under thick layers of Antarctic ice. In early January, they drilled a kilometer-long hole in the ice over an isolated Mercer lake. The result of this work has already borne fruit - scientists have discovered the remains of water not only underwater creatures, but also animals and plants that live in high mountain areas.

According to David Harwood, a micropalleontologist fromThe University of Nebraska-Lincoln, the discovery of animal remains was completely unexpected. Previously, scientists could not make such a discovery, because the research method was visual and did not imply the study of water samples: they simply peered under a thick layer of ice using radar and other remote sensing devices.

The remains of the animals were discovered while studyingsamples from the lake through a microscope. Among them were dead crustaceans and a creature known as a “water bear” or slow moving fish. David Harwood shared that he was surprised at the discovery of some land animals. For example, in the samples, an octopus tardigrad was found that lived in moist soil. Also antennae of plants and fungi were found.

The team believes that these animals lived inTransantarctic mountains, located approximately 50 kilometers from the lake. It is believed that they were washed into the lake during a warming event that occurred about 120,000 years ago. During the next cooling, they froze under a kilometer-long layer of ice and showed up just now.

This is a great discovery for scientists, as creaturessuch difficulties were discovered under the ice for the first time in history. In Lake Willans, located near Mercer, earlier, too, the remains of living beings were discovered, but these were tiny microbes.

You probably have something to say about this news, so we invite you to discuss it in the comments or in our Telegram chat!