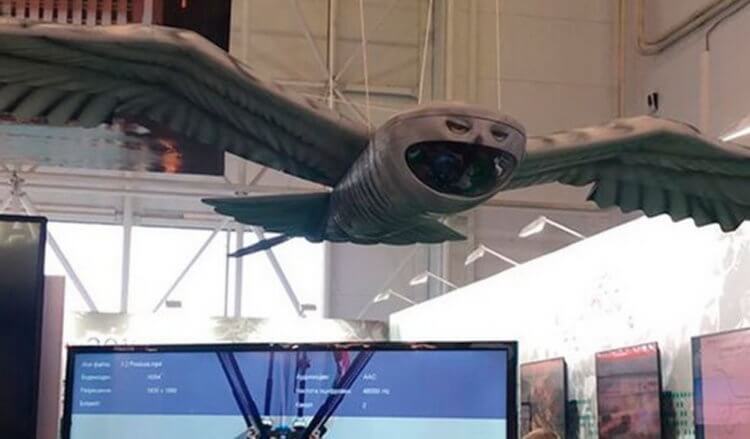 At the International Forum "Army-2019", heldin Kubinka near Moscow, the Russian developers of the ERA scientific and industrial enterprise are showing a new spy drone in the form of a large polar owl. The machine does not flap its wings (a screw engine is used for movement), but it has them, just like a tail. As indicated in the presentation at the booth of the Military Innovation Technopolis "ERA", the latest development is designed for reconnaissance tasks.

The developers report that the device was specifically made in the form of a bird "to reduce visual visibility in order to get closer to the target."

In the media with reference to representatives of the technopolis"ERA", showing a novelty, it is reported that the curb weight of the UAV complex is 5 kilograms. It can be transferred and run by one person.

As reported by TASS, the drone can determine the coordinates of the target, it also uses laser illumination to guide artillery and aircraft.

The machine is able to be autonomously in the air to40 minutes and fly up to 20 kilometers, which, noted by the developers, is enough to conduct exploration. In addition, the reconnaissance vehicle can detect targets up to 10 meters.

ERA specialists also indicate thatdeveloped another drone in the form of a falcon. Its distinctive feature in addition to the external similarity with the bird indicates the possibility of imitation of the falcon's voice using the built-in speaker.

On the web, the novelty was perceived ambiguously:

“If it doesn’t flap its wings when moving, then in principle it’s a so-so disguise”

“Best in pigeon shape! He will then be able to fly everywhere and empty himself on the heads of the enemy, ”wrote another.

Well, where without memes: