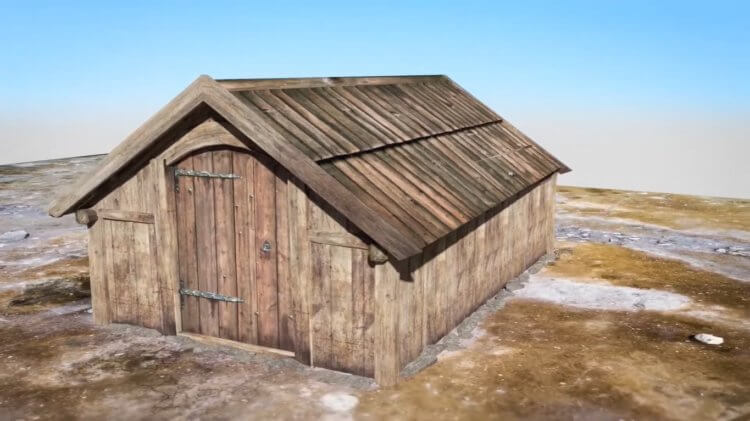 Have you ever watched viking movies? If so, then you probably know about their unusual funeral ritual, where noble rulers and warriors were sent to the afterlife inside a special ship with treasures and weapons. However, at some points in Scandinavia, archaeologists occasionally find mysterious structures in which people were also buried in the time of the Vikings. These structures are known to scientists as "houses of the dead", but they still do not know exactly about their purpose. Recently in Norway, another house was found by the remains of people, and archaeologists have several suggestions about why it was needed.

Reconstruction of the "house of the dead"

The remains of a medieval building were found onthe territory of the Norwegian village called Viniera, where work is currently underway on the construction of a highway. Archaeologists already knew that a Viking settlement was once located in this region for a long time, so there is nothing surprising in discovering an ancient structure. In particular, the researchers managed to unearth the remains of the burial mound, inside which was a recess with stones to strengthen the walls.

Photo from the excavation site of a mysterious house

How was the Viking buried?

According to archaeologists, the length of the funerarythe structure was five meters and the width was three meters. Heavy stones were located at the corners of the structure and held the walls of vertical planks. There is no doubt that the researchers found a rare "house of the dead" - it was built right in the middle of the burial mound and, apparently, was used as a grave. All over the world, only 15 such structures were found, most of them in Denmark and Sweden.

The tomb was built right in the middle of the burial mound.

Researchers have two assumptions aboutthe possible purpose of these buildings. For example, they could serve for practical purposes - they could temporarily bury the Vikings who died in the cold winter, so that when spring comes, they will conduct a more traditional burial ritual. At least the head of the current excavations, Raymond Sauvage, is sure of this.

Also, "houses of the dead" could have a ritualdestination. The Vikings could well bury the soldiers inside the tombs and make sacrifices so that their souls were calm and they helped them get a good harvest. Perhaps they were simply afraid of the dead and locked their bodies in such structures so that they did not come out of the graves and did not disturb them.

This is interesting: How will archaeologists of the future study our time?

Mysterious constructions of the world

However, the excavation of mysterious structures forarchaeologists - this is a common thing. For example, in Scotland and Ireland, researchers sometimes find crannogs - artificial islands on which ancient Scots erected houses. They could be reached only through bridges made of wood or stone stretched from the shore, so archaeologists believe that they were used to protect against robbers.

Maybe you know about other mysterious buildings in the world? Tell us about them in the comments or in our Telegram chat.

Of course, mysterious buildings are also inEgypt. One of them is located near the pyramid of Pharaoh Djoser - the so-called "road to the underworld" is a collection of tunnels through which the souls of dead people had to go. The Egyptians believed that before entering the afterlife, a person would face a battle with monsters, therefore they left weapons and objects for protection from the dark forces for dead people.