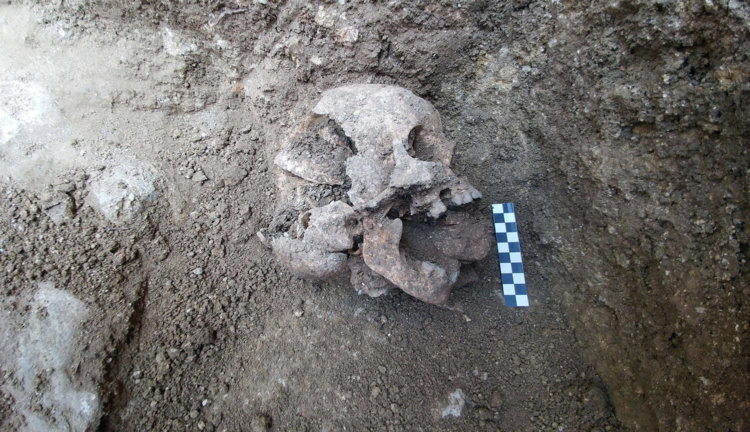 In ancient times there were very strange andeven terrifying traditions. For example, in 2016 in Kabardino-Balkaria, the skeleton of a 16-year-old girl from the first century AD with an abnormally long skull was excavated. Archaeologists explained that in ancient times, children were especially tightly tied up in their heads, since the elongated head was considered a sign of high society. In 2018, archaeologists discovered more terrible remains in Italy - the skeleton of a 10-year-old boy with a stone in his mouth.

The burial was found by archaeologists fromUniversity of Arizona and Stanford University. It was located in the Italian region of Umbria, in the cemetery of babies La Necropoli dei Bambini. It is assumed that the boy lived in the fifth century and, like all the children buried in this place, died of malaria. According to archaeologists, those who buried the child, feared his resurrection from the dead and the spread of the disease. As a defense, they placed a large stone in his mouth - this was deliberately done, because there are scratches from the teeth on its surface.

Locals called the boy found"The Vampire Lunyano." Earlier in this place were already found burials with "magical" objects like raven claws and bronze cauldrons with ash. The oldest skeleton belonged to a three-year-old girl - her arms and legs were burdened with heavy stones. In ancient times, people believed that in this way they did not allow "evil forces" to leave the bodies of sick people.

Similar remains were found in other parts of Italy. For example, in 2009, archaeologists unearthed the body of an elderly woman of the XVI century with a brick in her mouth. She was subsequently named the Vampire of Venice.

Archaeological team will return to the cemetery of babiesin the summer of 2019. They intend to find out how people responded to outbreaks of malaria. They remind that such studies help them to understand how people of antiquity thought. And what do you think about this? Tell us in our telegram chat.