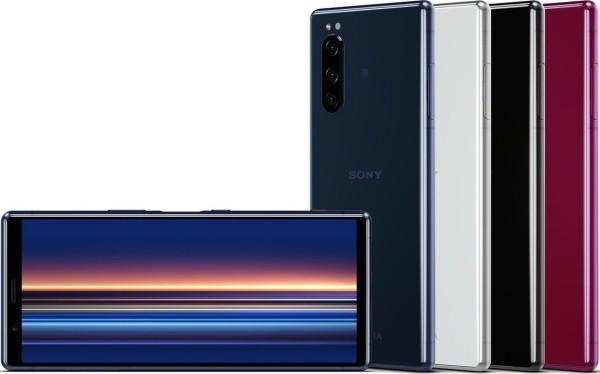 Sony has added a new smartphone to its flagship lineup - the Sony Xperia 5.

Sony Xperia 5 received the same, most powerfulhardware - Qualcomm Snapdragon 855 chipset and the same 6 GB of RAM. It has the same “cinema” format screen with an aspect ratio of 21: 9, and the same audio system with support for Dolby Atmos and a stereo speaker. Finally, there’s even a set of cameras here.

Triple main camera combines differentcharacteristics, but the same resolution modules - all three 12 MP. One has an ultra-wide angle lens with a focal length equivalent to 16 mm. The second, the main one, is equipped with an optical stabilization system for taking photos and a hybrid optical-electronic stabilization for video shooting. The third has a telephoto lens, the focal length is equivalent to 52 mm. There is also optical stabilization - this is important for a telephoto. Together, the cameras provide
2x optical zoom.

The 8 MP front camera with f / 2.0 aperture can shoot in HDR mode, reacts to gestures and recognizes a smile.

Dust and moisture resistant in accordance with IP68.

Reducing the screen diagonal allowed slightlyreduce the battery capacity without loss in battery life without recharging, and, accordingly, affected the size of the smartphone. It has already become - only 68 mm - and shorter, it is obviously more convenient to use it.

Fingerprint scanner, like Sony Xperia 1,located on the side, built into the power button. The functions of the side faces of the smartphone are not limited to this. Here, too, the ability to control by touching the edges of the case is realized. The feature is known as Side Sense.

Supported by fast charging 18 watts, wireless charging is not provided.

The smartphone will go on sale sometime in the third quarter of this year. Price not announced.

At the moment, there are already a number of video views of the model.