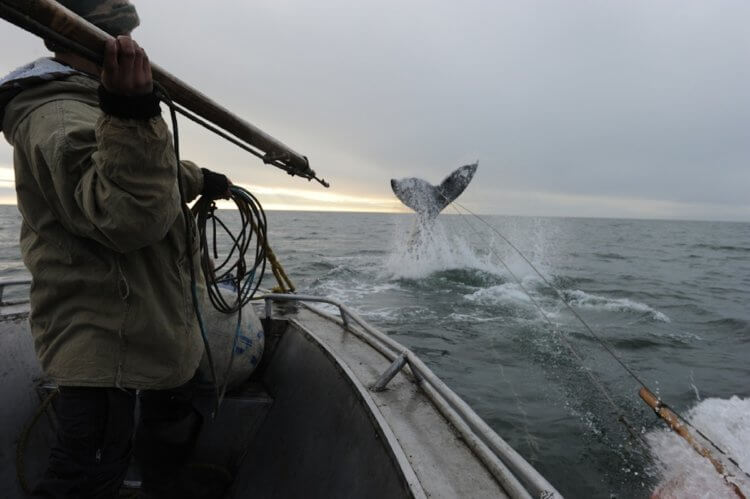 Whale hunting is prohibited worldwide.The exception is the inhabitants of Chukotka - they have official permission to hunt, though not commercial. The fact is that for the people living in the farthest north off the coast of the Bering Sea, that is, in permafrost conditions, this fishing is the only way to survive and feed their families. This occupation is deadly, because whales are real giants living in the sea. Moreover, the Chukchi hunt them not on large ships, and not even on boats, but on homemade small boats. The main weapons in this case are harpoons, which whalers throw by hand. That is, in fact, whalers have to hunt with improvised means. Nevertheless, they manage to kill about 120-140 whales in a year.

The village of Lorino is the largest village in Chukotka.

To see with my own eyes how people live incomplete isolation from civilization in the conditions of the far north, you will have to fly on a propeller plane to the regional center of Lavrentiya, and then get to the village of Lorino, which is located on the coast. Between these settlements three times a week there is a regular bus on an unmade road.

Lorino is the largest settlement in Chukotka

Lorino is the largest national Chukchivillage. About a thousand people live in it, that is, about 10 times more than on the nearby island of Kruzenshtern. The village is located on the territory of the ancient Eskimo settlement Nukak. The village has a secondary school, a kindergarten and even a cultural center. By the way, from Lorino to the USA is only 150 kilometers.

In addition to hunting whales, local residents huntfishing, sled dogs and deer are bred. Even though whaling is not commercial, the hunters are paid. But the meat is distributed free of charge. When the whale is delivered to the shore, everyone comes up and cuts off from him as much as he needs.

Lorino is located 150 km from the nearest US state - Alaska

Why did the Chukchi forgot how to hunt whales

An interesting fact is that in Soviet times the Chukchidid not engage in whale hunting, as there were special whaling fleets for this. The USSR produced more than 40% of whales from the total world production. However, as a result of a severe decline in the population of these animals, in 1986 the International Whaling Commission imposed a moratorium on whaling. True, in the USSR, production was stopped only a year later.

During the existence of whaling fleets,local residents have practically forgotten how to hunt on their own. They had to do on land only butchering carcasses. In the nineties, local residents were generally left to fend for themselves, as they stopped delivering food. As a result, they had to retrain in whaling to survive. By that time, whaling was remembered only by a few old people who lived to a respectable age.

Gray whales grow up to 15 meters in length

The most dangerous hunt in the world

There is an opinion that the most dangerous game onthat man has ever hunted are gray whales. They grow up to 15 meters in length, and their weight reaches 36 tons. In general, they themselves do not show aggression towards humans. They are described as curious, playful, and easy-going animals.

However, when the gray whale understands what they wantcause harm, the rules change. From a peaceful animal, he turns into an aggressive killer, resisting the hunt. Moreover, often the gray whale does not try to run away and hide in the depths, but tries to destroy the offender.

There are many stories in whaling folkloreabout how gray whales attacked 25-meter schooners. With their huge noses, they beat on the sides of wooden ships in order to pierce them. Therefore, the canoes of the Chukchi, made mainly of the skin and fin of a whale, do not protect hunters on the high seas.

According to experienced whalers, gray whales sometimeschasing boats - catching up with them from behind and trying to break them. Another common technique of these animals is to dive under the boat and emerge abruptly. In this way, they easily throw the whalers into the air and capsize the ship. I must say that for the Chukchi, even just being overboard of a boat is tantamount to death, since they do not know how to swim. Due to low temperatures, they simply have nowhere to learn this.

How the Chukchi hunt whales

The whaling season starts in early April.To make this process as safe as possible, at least three boats go out to sea. In this case, there is a chance to save people who are in the water. Usually hunters are armed with harpoons and firearms. Once in the open sea, they carefully look at the surface of the water to discover a characteristic fountain.

The Chukchi use harpoons for hunting.

As soon as the hunters spot a whale, all boatsswim to it and wait for it to surface again. Whales stay underwater for up to 8 minutes. When an animal's blowhole appears above the surface, whalers throw harpoons at it, consisting of a metal tip and a shaft (wooden stick). The shaft is picked up for reuse, and the tip remains in the body of the whale. A rope and a float are tied to it. The latter serves not only as markers indicating the location of the whale. When several tips are in the whale's body, the floats exhaust the animal, which causes it to rise to the surface more often.

There are cases when a wounded whale along with buoysgoes under water and drowns. In this case, the hunters are left without their tools and without prey. But more often, when several harpoons are in the body of a whale, it is finished off with a gun and towed ashore.

While hunting, a whale can capsize a small boat.

It must be said that many environmentalorganizations denounce whaling and try to convince locals to stop doing it. To prevent the locals from having to kill whales, they send humanitarian aid. However, the Chukchi will not be able to live without hunting if humanitarian aid is not provided to them on a permanent basis.

In the 21st century, the Chukchi faced a new danger,which comes from gray whales. When butchered, about one in ten carcasses has an unbearable chemical stench. Whale bodies are so polluted that even dogs refuse to eat stinky meat.

According to experts, the appearance of poisonedwhales coincided with a decline in their population. Despite the fact that scientists are monitoring the pestilence of these animals, the discovery made by the Chukchi went unnoticed. However, the locals are very worried. For them, having whales in the sea is a matter of life and death. As they themselves say, if the whales die, then the Chukchi will die too. Finally, I note that not only whales, but also more than 5 million people suffer from environmental pollution every year. This is another serious problem of mankind along with global warming.