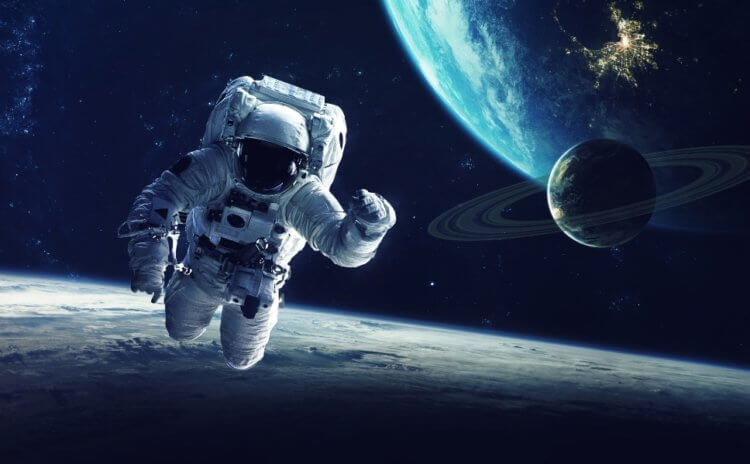 Right now, at an altitude of 408 kilometers aboveEarth, the International Space Station operates. Inside it, for over twenty years, groups of astronauts from various countries have been working, regularly replacing each other. All of them constantly need three basic things for any life: water, food and air. Everything is clear with food - it is supplied in cargo ships, and the crew can eat rice porridge, mushroom soup, cottage cheese and many other tasty and nutritious foods. And how can oxygen and water be obtained in space, given that they are almost never delivered in cargo ships? These two vital elements are closely related and are produced using special equipment. Now we will briefly understand how it all works.

Astronauts have no problems with oxygen in space - everything is provided

Where does oxygen come from on the ISS?

For the production of oxygen at the space stationthe Russian system Electron-VM, which was developed by NIIkhimmash, is responsible. It has been working on the ISS since the very first day of its existence and produces oxygen through the electrolysis of water. In general, the system works very simply: water enters a special container and an electric current is passed through it, as a result of which the liquid decomposes into oxygen and hydrogen molecules.

In one hour of operation, the system can produce up to160 liters of oxygen and 320 liters of hydrogen. To provide one person with a daily dose of oxygen, about 1 liter of water is required. In terms of quality, the resulting oxygen meets all the requirements for medical oxygen, so it is safe for people and remains on board. And hydrogen, at least today, is released into outer space, but in the future they also hope to extract something useful from it.

When oxygen is produced from water, hydrogen ends up outside the ISS

The first air generation system "Electron-VM"located in the Zvezda service module. In July, the second system was launched on the ISS, which is located in the new Nauka module. It is believed that both systems are completely interchangeable and can provide the station crew with air during maintenance of one of them.

The Electron-VM system does sometimesbreaks. For example, this situation occurred in 2020, but the breakdown was quickly fixed. In emergency cases, the crew of the space station can get oxygen from cylinders - everything is already provided in advance.

See also: How much garbage is on the ISS and how astronauts throw it away

Where does the water on the ISS come from?

Water is delivered to the ISS on cargo ships, butthis happens very rarely. The station has a system that allows you to save water as much as possible due to its multiple processing. When crew members wash, the used water does not go to waste - it accumulates in a special compartment and is thoroughly cleaned so that it can be reused, even for drinking.

There are several toilets on the ISS. It looks like a bathroom in the Tranquility module

Finally, some water can be extracted from the air, because the air on the ISS also has some level of humidity.

In total, for the full functioning of the ISS,requires about 9 liters of water per year. Approximately 93% of the used water is reused, so it is not necessary to deliver water to the station so often, which saves a lot of money. The resulting water, among other things, is used to produce oxygen in the way mentioned above.

You will be interested: Why can't cleaning be done in the dirtiest section of the ISS?

How is oxygen produced on Mars?

It is worth noting that in the future people want to flyto the Moon and Mars, and there, too, you need to somehow extract oxygen - transporting cylinders to such distances will cost unthinkable money. The development of technologies for the extraction of oxygen on other planets is already actively underway. In 2021, the Perseverance rover made a successful experiment in this direction.

He used the MOXIE apparatus, which is similar tosmall box and converts carbon dioxide into oxygen. It has been experimentally proven that the tool is capable of producing 5.4 grams of oxygen per hour. It is small, but at the moment a very good result. You can read more about the work of MOXIE in this material.

Do you want to expand your horizons? Read our other materials by subscribing to the Zen channel.

And if you want to talk about science and technology, but you have no one to talk to, join our Telegram chat - there you will definitely find interesting interlocutors.