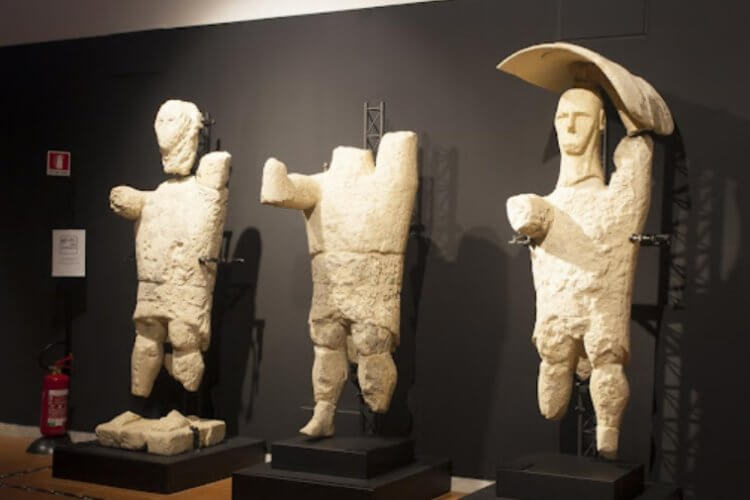 Stone giants of Sardinia, or giants of MontePrama are huge statues about 3000 years old. They were discovered in the spring of 1974 by Sardinian farmers who plowed fields and accidentally stumbled upon what looked like a large rock. Upon closer inspection, they discovered that they found something much more intriguing - a large stone head. Their discovery became one of the most important in the western Mediterranean, dating back to the Iron Age. Sardinian farmers found the first of thousands of fragments collected by archaeologists over the following decades. Dozens of giant statues have been assembled from these parts. All of them are cut from solid blocks of limestone, their height is often more than two meters. Historians are still racking their brains over what exactly the giants of Monte Prama are. But everyone agrees that they are testament to the remarkable Iron Age culture that flourished nearly 3,000 years ago.

The giants of Monte Prama were created from solid limestone about 3,000 years ago.

Who is depicted by the ancient statues of Monte Prama

The stone giants of Sardinia have enoughunusual, memorable facial features. They have triangular faces with pronounced eyebrows and noses that have a strict T-shape. But the most unusual are the eyes. Each eye is formed by two almost perfect circles - outer and inner. Some of the statues hold shields, others hold bows.

On this basis, scientists have divided the statues into threetype - archers, warriors and boxers. The statues are missing many elements, but archaeologists believe that when they were not damaged, each sculpture displayed the full range of features characteristic of a particular category.

Eyes are one of the main distinguishing features of the giants of Monte Prama.

Boxers, the most numerous category onpresent day. They are depicted with bare chest and stocky bodies. Each figure holds a shield over its head. Archaeologists have found out from the fragments that the boxers once held a ritual combat glove in their right hand. Historians speculate that they symbolized athletic combatants who may have played a religious role.

Archers are presented with the right hand raised ingreeting sign. Their gloved left hand holds a bow over their shoulder. No well-preserved archer heads have yet been found, so scientists believe they have the same facial features as the warriors. The latter were found in small numbers and also poorly preserved. Their helmets have a crest in the center and two horns. Probably initially they all carried round shields.

Nuragic culture and history of the giants of Sardinia

When the first fragments of the statues were discoveredMont'e Prama, scholars have suggested that they were part of a Carthaginian temple dating back to 500 BC. But after more detailed research, scientists came to the conclusion that stone fragments appeared long before the Carthaginians. After Giovanni Lilliu, considered by many to be the father of Sardinian archeology, examined the fragments, he discovered that they have similarities with the bronze statuettes created by the Nuragic civilization of Sardinia. This means that they are about 3000 years old. Of course, they are younger than the most ancient object built by man, nevertheless, their age is colossal.

Nuraghe - the attraction of the island of Sardinia

Flourishing between the 18th and 8th centuries BCThe Nuragic culture is known for its skill in working metal and stone. All over the island, the Nuragics built many megalithic structures known as the Nuraghe (after which this culture was named). Often they are dominated by a tower with a round chamber. Today more than 6,000 of these structures adorn the landscape of the island.

Nuragi are found only in Sardinia.Their exact purpose remains a mystery, but theories are very different - from forts and dwellings, to palaces and even, possibly, combinations of all three structures. The end of Nuraghe construction appears to have come around 1200 BC, but the buildings continued to be used for centuries.

Sometime after the creation of the giantsthe culture of the Nuraghe began to weaken and decline. The Greeks and Phoenicians claimed the islands rich in mineral resources. The Phoenicians ultimately prevailed. Later, around the sixth century BC, the island was conquered by the Carthaginians.

At some point after the decline of the nuragicthe culture giants were destroyed. According to scientists, this was clearly a deliberate act of desecration. Experts believe the statues were destroyed by Phoenician or Carthaginian colonists in an attempt to impose their new order on the island, while humiliating the old one.

During the excavations of Monte Prama, an ancient burial was discovered

Mysteries of the statues of Monte Prama

Why the Nuragics erected these figures and how theywere located at this location? Experts are still puzzling over this issue. Some argue that the three types of statues represent the categories of the Nuraghe military and priestly elite who may have been buried in the necropolis.

In addition to the discovery of thousands of fragments of statues, whenexcavations at Monte Prama in 1977-79, archaeologists have found 30 burials from the ancient Nuragian necropolis. Cylindrical graves covered with sandstone slabs contained men and women buried in seated positions or on their knees.

Another hypothesis is that the statuesdepict heroic figures from the Nuragic past, possibly those who built the massive structures of the Nuraghe. Located next to the necropolis, they served as a reminder of the traditional values ​​and common heritage that binds the island community together.

Even today, the Sardinians strongly identify withthese symbols of their ancient past. The faces of the giants of Monte Prama became so famous and famous that they even replaced the buildings of the Nuraghe, another symbol of the ancient past of Sardinia. Around the same time, when the Nuragics were creating the giants Monte Prama and Nuraghe, the Maya were building their structures on another continent, which were recently discovered by archaeologists.