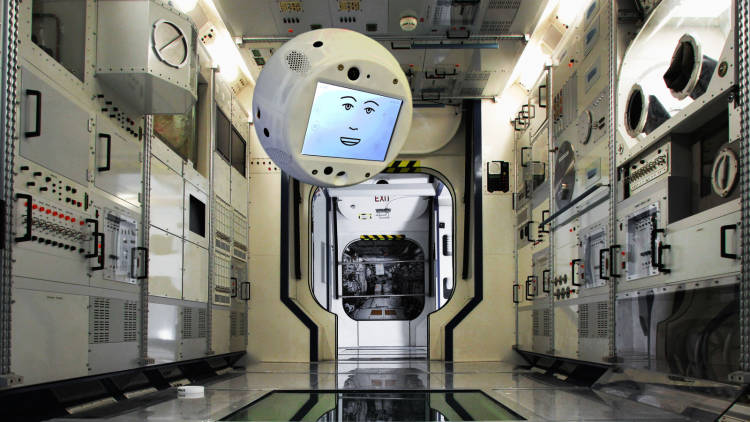 A very curious robot will be on board the ISS inthe next mission to replenish SpaceX. It is made in the form of a ball with a flat side with a screen on which his face is painted. He can speak, answer verbal commands and fly. The robot's name is CIMON, abbreviated from the "interactive mobile companion of the crew," and it essentially represents the flying brain from IBM with the body and mechanism for flying from Airbus. This is a joint project of companies that should simplify the work of astronauts aboard the International Space Station.

The robots were designed toinstructions for repairing the voice command were displayed, and the astronauts' hands were free or busy with repairs. CIMON will also be able to demonstrate experimental procedures and will simply serve as a standalone database with voice control. Before he earns his full strength, he will have to pass several tests upon arrival at the station.

German astronaut Alexander Gerst willuse CIMON to experiment with crystals and Rubik's cube, as well as to conduct a medical experiment in which the robot will serve as a flying camera. IBM trained CIMON using the voice of Gerst, and the current version of the robot responds specifically to its commands. This will help space agencies around the world find out how useful AI in space is and whether it can be taken in the future for long-term missions.

Already previously flying Falcon 9 rocket with CIMON andAstronaut supplies, as well as new scientific instruments, will have to go today, June 29, unless the launch is postponed due to weather conditions.

Updated: the rocket successfully launched, the cargo went into the docking orbit and will be on the ISS in three days.