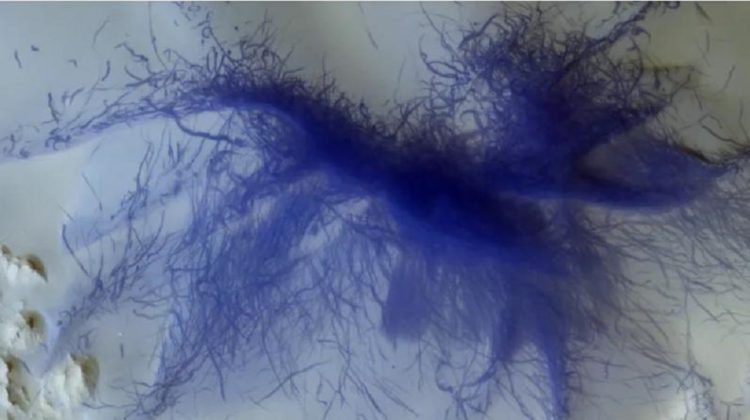 Alas, David Bowie was wrong about spiders onMars, although looking at these amazing new shots of the huge blue tarantula on the surface of the Red Planet, one would have thought otherwise. This picture in false colors demonstrates a series of traces of the Martian dust devils. The photograph, among many others, was made by the European ExoMars Trace Gas Orbiter. Some of the pictures were released today so that you can enjoy the magnificent Martian landscapes from a satellite flight.

ExoMars Trace Gas Orbiter (TGO) arrived on Mars atOctober 2016, but only in February 2018, he was in a low orbit over Mars. Scientific work began a couple of months later. The project is jointly managed by the European Space Agency (ESA) and Roscosmos, and its main task is to search for trace gases, such as methane, that will help scientists better understand the Red Planet’s ability to sustain life. Or that ability in the past.

What makes TGO different is the amazing camera.Surface Imaging System (CaSSIS), which he uses to study the surface of Mars from orbit. CaSSIS is unique in that it can produce crystal clear, high-resolution 3D images in addition to ordinary 2D images.

Yes, actually, see for yourself.

Image in the false color of the Martian regionTerra Sabaea features a spider-like set of surface features. In fact, these are traces left by dust devils, a fairly frequent weather phenomenon on Mars. This picture was observed on the crest of the ridge and, according to ESA, represents "in fact, the convergence of hundreds or even thousands of small Martian tornadoes." The image was presented in a combined color to reveal the surface features. Its real color, according to ESA, should be dark red, as dust devils take out fresh material from under the surface.

Layered features of the South Pole of Mars

Chose a place for a future colony? Tell us in our chat in Telegram.