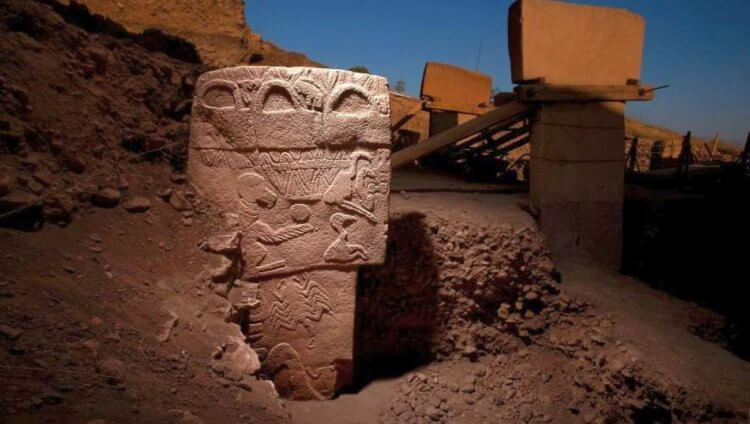 Around 10 730 BC beganThe era of the late Dryas - the final stage of the last glaciation. The reason for its beginning has not yet been known, but several scientists immediately find that a global decrease in temperature could begin after the fall of a huge comet. The 31-km crater formed after this disaster was found under the ice shield of Greenland, and the drawings on the walls of the ancient Turkish temple only confirmed this assumption.

The drawings were found in Gobekli Tepe temple,the name of which from Turkish can be translated as "Big Pot". It is believed that it was built long before the appearance of Stonehenge, and in addition to performing the function of the temple was an ancient observatory for observing the night sky. This is evidenced by the column, which depicts a variety of animals - scientists assume that the drawings and their location correspond to astronomical constellations.

Most likely, the architectural structure wasa monument to an ancient catastrophe - it depicts a headless man, symbolizing the suffering and death of people after the alleged comet's fall. The remaining drawings imply care for the wounded people, so the consequences of the disaster could last for centuries. The catastrophe and the subsequent climate change really strongly influenced the ancient people, forcing them to farm and teach them to survive in harsh conditions.

Scientists are so sure of their assumptions, becausethat conducted a computer simulation of events that happened thousands of years ago. The simulation results showed that at that time a catastrophe could really have happened, especially since the age of the drawings and the impact crater in Greenland are about the same.

On the subject of ancient finds also recommendread our material about cheese found in an ancient tomb. Despite its taste, it could be extremely dangerous to health due to the presence of pathogenic bacteria.

If you are interested in the news of science and technology, subscribe to our channel in Yandex. Dzen. There you will find materials that are not published on the site!