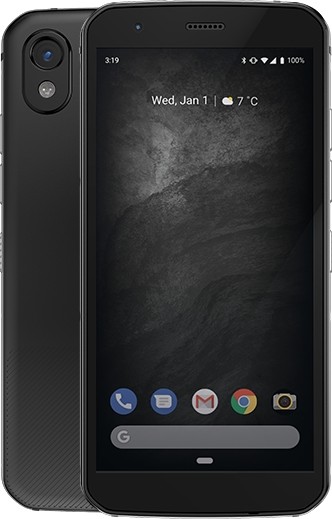 The Cat Cat S52 rugged smartphone, which Caterpillar hinted at soon to be released a few days ago, is presented in full growth - a full list of specifications has been announced.

He was not particularly impressive. The device is nothing outstanding from itself - a typical average. Built on the MediaTek Helio P35 chipset, it has 4 GB of RAM, a small-sized screen of 5.65 ″ with a resolution of HD + more or less adequate to this diagonal. They promise a “best-in-class” camera - apparently, this should be considered as a modest assessment of the class, since the camera is quite ordinary - 12-megapixel, except that the aperture is decent - f / 1.8.

There is a fingerprint scanner, there is support for NFC.

The smartphone must survive a fall from one and a halfmeters, not afraid of swimming (protection against water and dust in accordance with IP68), tolerates harsh temperature conditions (from -30 ° to 65 °), resistant to vibration, salt fog and other mucks.

It looks modest, no bright details. The price tag has not yet been announced.