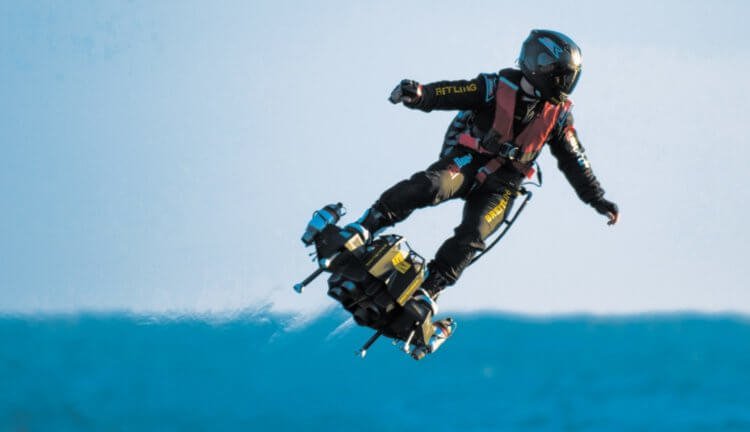 Do you think there is a flying skateboard(hoverboard) from the movie "Back to the Future" really? For many, this may be a discovery, but a fantastic means of transportation has long been created and used for flying. It is called Flyboard Air and was invented by the French inventor Frankie Zapat. The hoverboard can fly at speeds of up to 280 kilometers per hour at a height of 3,000 meters. In 2016, Frankie traveled 2 kilometers on his board in a record 3 minutes, and now he wants to move from France to the UK via the English Channel. Will he succeed?

Judging by the characteristics of the board Flyboard Air,Frankie Zapata has every chance to do that. The device rises into the air due to the five jet engines, each of which has a capacity of 250 horsepower. Hoverboard consists of three parts: the board itself, the control panel and the fuel tank. By the way, kerosene is used as fuel - the tank is hung on the pilot's back. The fuel lasts only 10 minutes of flight, so when crossing the English Channel, the inventor will have to stop to refuel.

First flight across the English Channel

Frankie Zapat wants to dedicate his flight to the 100th anniversaryfrom the day of the first crossing of the strait on an aircraft. The first flight was made on July 25, 1909 by a French aviator named Louis Blériot on one of the first aircraft in history. At that time, biplanes with two pairs of wings placed one above the other were actively tested in England. In France, monoplanes were created with one pair of wings - it was on one of them that Louis flew.

Louis Bleriot and his monoplane

The place of his take-off at 04:35 in the morning was the coast of France. In the middle of the flight there was a strong wind, because of which the pilot lost his course but returned to the starting position, focusing on the movement of the ships sailing below. In the end, Louis Bleriot landed safely on the coast of England after 37 minutes. This event proved the great advantage of the French monoplanes over the British biplanes.

Frankie Zapata and his hoverboard

From France to England on the hoverboard

Perhaps the flight across the English Channel will bethe most difficult flight in the career of Frankie Zapata. As mentioned above, in 2016 he overcame 2 kilometers on a flying skateboard, but on July 25 he would have to fly a section of the strait over 35 kilometers wide. Somewhere in the middle of the route, the hoverboard runs out of fuel, so the inventor will have to go down to the floating ship for refueling. Perhaps he will be able to refuel right in the air - then we can assume that the flight was continuous.

Photos of the English Channel by satellite

Frank Zapata has a lot of flying experience becauseHe demonstrates the possibilities of hoverboard in the framework of many national holidays. For example, on the day of the capture of Bastille, he flew over his hoverboard over a crowd of people. According to him, then he used only 3% of the capabilities of the aircraft, and when crossing the English Channel, it would be necessary to use all 99.9%. Honestly, even Frankie Zapata himself is not completely confident about the success of his upcoming flight.

Frankie Zapata and his inventions

Fly on the hoverboard at the momentAir with jet engines only the inventor himself dares. The fact is that to control such a device requires a lot of experience and good physical preparation. In addition, a flight on a flying skateboard can be fatal - it’s scary to imagine what will become a man when falling from a height of 3000 meters. That is why even Frankie Zapata does not risk rising above 30 meters, almost always flies above the surface of the water.

But another invention of the French craftsman underThe name Flyboard is available even to ordinary people. Surely you watched the video, where thrill lovers fly over the water on the board to which the hose is attached - this is also the work of Frankie. The board rises to a height of up to 15 meters due to the flow of water flowing out of the hose.

This is interesting: The coolest entertainment of the summer is flying skateboard.

Would you risk flying on a jet skateboard? Feel free to share your opinion in the comments, or in our Telegram-chat.