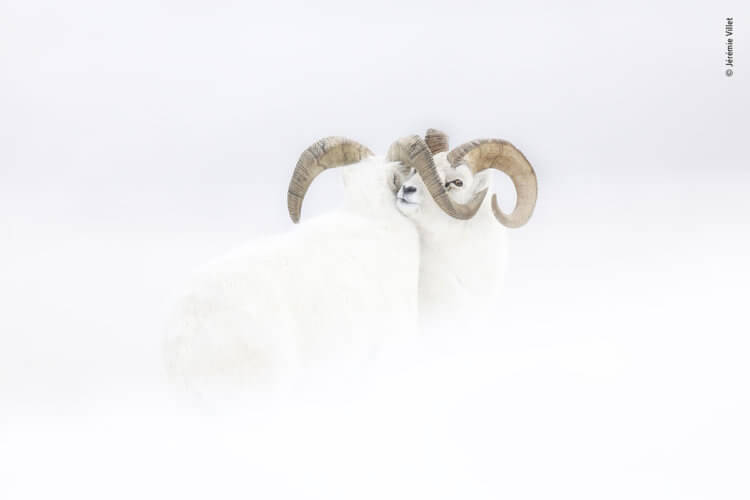 In order to get amazing pictureswildlife, photographers show incredible restraint and patience. To demonstrate the diversity of living creatures on our planet, photographers observed ant colonies in tropical forests, spent the night in deserts, and monitored the hunt of dangerous predators. For 55 years in a row, photographers around the world have been participating in the "Best Wildlife Photography" competition. In 2019, more than 48 thousand applications were submitted from 100 different countries. Starting October 18, all works will be exhibited at the London Museum of Natural History. Well, we can get to know the best wildlife shots right now.

Winner in the category of “rising star” Jeremy Willet. The photo is called a “stopped moment"

Winner in the Animal Behavior category

First place deservedly receivedAnimal photographer Yongqing Bao, who managed to capture an extremely unexpected meeting of a groundhog and a fox. According to the judges, the picture combines the “horror and humor” of the situation in which the animals found themselves. Despite how funny this photo seems at first glance, the fate of the groundhog turned out to be tragic. The photo captures the moment a second before the predator attacks the rodent. Unfortunately, even the marmot mother, having intervened in the fight, could not rectify the situation. Bao himself, who observed what was happening from the shelter, rightly noted in an interview with the BBC: “This is life.” And you can’t argue.

What emotions did this photo arouse in you? You can share your experience with the participants of our Telegram chat.

Winner in the category “Best Young Photographer of the Year”

Cruz Erdmann took a picture of a reef squid duringDive time at Lemba Strait near North Sulawesi in Indonesia. The squid that Cruz came across looked after one another with luminous, rapidly changing lines, spots and stripes of different shades and colors. When Cruise approached, one squid immediately disappeared, but the other, probably a male, soared long enough, as a result of Erdmann was able to capture this truly amazing moment of the underwater show.

Read more news from the world of wildlife on our channel in Yandex.Zen.

Winner in the Mammal Behavior category

For photographer Ingo Arndt, this shot markeda culmination of seven months during which he hunted down wild cougars and survived severe frosts in the Torres del Paine area in Patagonia, Chile. For half an hour, Arndt watched the cougar creep up to the male guanaco. At the time of the attack, the guanaco's neck turned to the side, after which the cougar jumped on his back and tried to inflict a crushing bite on his neck. Guanaco could not lose the predator, and only when he seemed to intentionally fall on her, she let him go, missing a blow that could easily knock out her teeth or break her bones. This hunt for the cougar was unsuccessful.

Ingo Arndt - winner in the nomination for the behavior of mammals

Winner in the category “Portraits of animals”

You might think that with the photo on youan ordinary ant looks, but you just need to count the number of legs and notice the tentacles on both sides of the neatly folded fangs, as it becomes clear that someone else is in front of you. At first, photographer Rivan Baspas thought that in front of him is a red weaver ant, who lives in the subtropical forest of an Indian reserve in West Bengal. But upon closer inspection, the photographer realized that it was a tiny spider imitating an ant. Many species of spiders imitate the appearance, behavior and even the smell of ants. Penetration into a colony of ants can help hungry arthropods get enough or not to be eaten by predators who do not like ants. The spider in the photo, as it turned out, was hunting.

Rivan Baspas - winner in the category of animal portraits

Interesting: The Best Science Photo of 2019

Winner in the category “Animals in their habitat”

A small herd of males of Tibetan Chiru antelopesleaves traces on a snowy slope in the Kumukuli desert in the Chinese national reserve Altun Shan. Chiru males with long thin black horns are found only on the Qinghai-Tibet plateau. Chiru live at an altitude of up to 5.5 km at a temperature that sometimes reaches minus 40 degrees Celsius. In winter, antelopes migrate to the relatively warm, remote areas of the Kumukuli desert. Over the years, photographer Shanzhen Fan has made a difficult, alpine journey to capture the chira. On this day, the air was fresh and clean after snowfall. The photo was taken from a distance of 1 kilometer.

And which of the above photos did you like the most? Write in the comments.