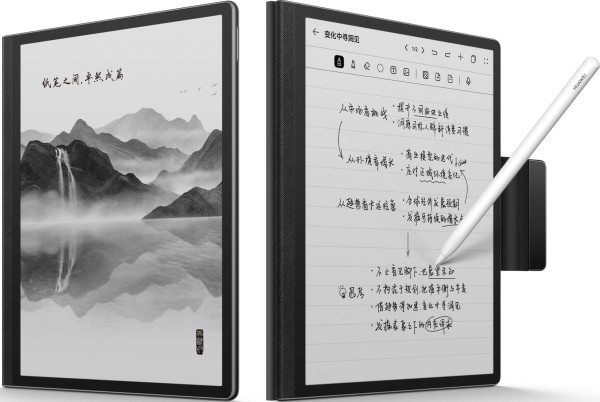 In early September, Huawei, among other things, released an update to its MatePad Paper reader.

So far, the novelty is presented only in China.And officially called Huawei MatePad Paper 墨水平板 典藏版. Automatic translators translate hieroglyphs as Collector's Edition, Collector's Edition. But, apparently, the manufacturer prefers another translation - Premium Edition. At least, these words are spelled out in the address of the page on the official website. Let's stop there. Huawei MatePad Premium Edition. Nice but long.

Like its ancestor, formally, the newcomer is classified as a tablet, but, in fact, it is rather an ink reader, a reader, an e-book.

Visible to the naked eye differences compared to the original version of the Premium Edition yes.

1. Only one option for the amount of memory, 6 + 128 GB. Why an ink reader needs so much memory is an open question. The ancestor also had a 4+64 GB variety.

2. Support for LTE networks suddenly appeared, which is a rare rarity for readers. (And only LTE. There is no 2G, no 3G, no 5G).

About the rest of the characteristics.

The screen is classic ink. Diagonal 10.3″, resolution 1404×1872 (227 ppi), backlit. Exactly the same screens are used by other manufacturers of readers. You can remember, for example, Onyx Boox Note Air 2.

There is support for native second-generation Huawei M-Pencil styluses (the stylus comes with the reader).

As you might guess, Huawei MatePad is imprisonedPaper Premium Edition is primarily for reading and taking notes (and therefore the stylus). Plus, you can listen to something - there are even speakers. But in order to watch a video or play something, of course, there will be problems. E-Ink screens are not suitable for such things. Huawei, of course, claims that they have a clever Smart Refresh technology ... But no, it's still not for that.

The brand of the chipset has been officially confirmed. In February, when the ancestor was announced, it was still in question.
Here, as I then assumed, indeedcosts HiSilicon Kirin 820E. Rare chip. It is used, in particular, in the smartphone Huawei nova 8 Russia. In AnTuTu, if it was a real tablet, and not a reader, one would expect around 400 thousand points.

Other. There is a sixth Wi-Fi. There is a fingerprint scanner - combined with the power button.

The device runs on HarmonyOS. So it is quite possible to install additional software from the application store.