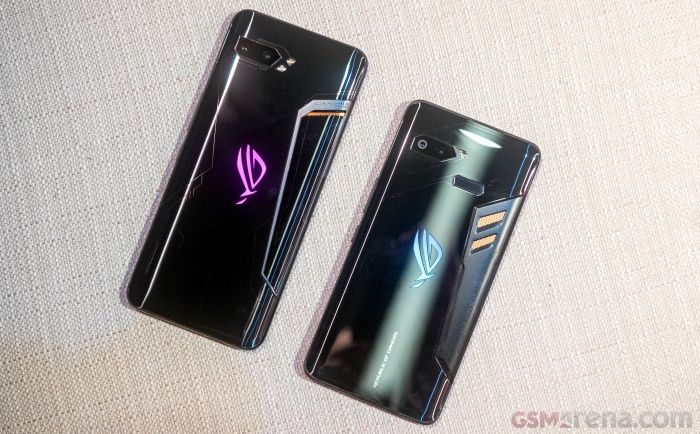 Continuity is available - new igromonstr -“The coolest”, just the notion of “the most” in a year has managed to change a little. Plus, the ASUS ROG Phone II may have pushed back a little more, in many ways becoming “the only one in the world. In general, the smartphone is out of competition.

ASUS ROG Phone II got the most powerful chipsetand in the overclocked version. This is the first owner of Qualcomm Snapdragon 855 Plus, whose frequency reaches 2.96 GHz. If you want such a fiery motor, you don’t want a cooling system - it certainly is, a new, multi-level one, with an evaporation chamber. In case this is not enough, an accessory is provided - AeroActive Cooler II, external cooler.

ASUS ROG Phone II has the largest ever RAM capacity - 12 GB. And the newest flash memory UFS 3.0 in the amount of 512 GB.

The screen has increased from 6 inches to 6.59 ″. The display refresh rate is from 90 Hz to 120 Hz. In addition, the frequency of touch processing on the screen is increased to 240 Hz, this provides a 49-ms delay in response to a touch — lower than that of any of the existing touch screens.

Increased battery - up to 6000 mAh. Enough for 7 hours of non-explosive play. Implemented fast charging - using a 30-watt charger for 1 h 40 min to 100%. It is argued that the battery has high reliability and durability.

Cameras replaced with more appropriatethe requirement of today. The main 48-megapixel f / 1.79 aperture is paired with a 13-megapixel wide angle (125 °). Frontal 24 MP can shoot in 6-megapixel mode (pixels are combined into clusters of 4 pieces).

As before, AirTrigger II is provided - the touch buttons on the end, which becomes the top in landscape orientation, now work faster.

For greater reliability, four WiFi antennas are built into the case.

We also worked on the sound - it became even better and louder. In headphones - DTS: X Ultra.

Officially, the price has not been announced yet. By assumption The Verge she will be at least $ 899. The model, designed for the global market, should be released in the first week of September.