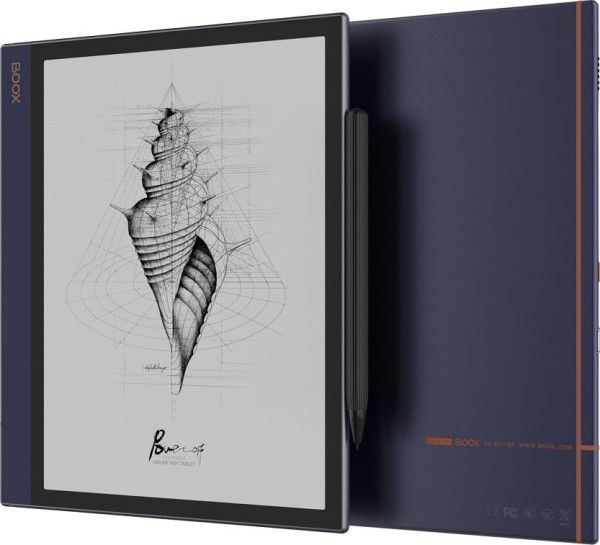 Beyond the giant Onyx Boox Max Lumi, Onyxintroduced a more compact e-ink device called the Onyx Boox Note Air. Relatively compact, of course. Still, the screen with a diagonal of 10.3 ″ cannot be made very small. This is not a six-inch reader that you can read on the subway during rush hour while hanging on the rail. 229.4 x 195.4 x 5.8 mm - it's hard to disagree, the thickness is impressive. Why such records are needed, however, it is better not to ask. But the weight is rather big, 420 grams. This is even slightly more than the previous Note series devices. Apparently, thanks to the material of the case - aluminum is, of course, not cast iron, but still.

About the device itself. The design is suddenly curious. Blue colors. Three thin fields around the screen and one wide. They say it's more comfortable to hold this way. Magnetic stylus included (pressure-sensitive, everything is as it should be). You could plug in a keyboard and try to use the Air as a very specific laptop.

By design, Onyx Boox Note Air is,of course, primarily a document reader. Not as expensive and huge as the Max series (13 ″ is almost A4 format), but still readable PDF / DjVu, i.e. all kinds of documentation and the like.

The most interesting thing, as usual, is the screen. Electronic ink E-Ink Carta. Diagonal 10.3 ″. The resolution is high - 1404 × 1872 (227 ppi). Signature illumination Moon Light 2 with color control. The highlight is the two sensory layers. Traditional capacitive (as in smartphones and tablets) and inductive (Wacom) - for the stylus.

It's not clear with the chipset. An eight-core Snapdragon with a frequency of 1.8 GHz is announced, faster than used in previous models. Both the latest Qualcomm Snapdragon 460 and, for example, Qualcomm Snapdragon 632 2018 of the year are suitable for this description. But can the 2018 chip be compatible with the tenth Android? Yes, Android on the device is quite fresh, which is nice.

Compared to previous devices in the seriesNote (Note 2, Note Pro) suddenly there is less memory - 3 GB of RAM, 32 GB of storage (it was 4 + 64 GB). Although by the standards of such a specific device as an e-reader, this amount is quite enough. Neither toys nor even the browser you will often launch here. There seems to be no support for memory cards. But you can connect an external flash drive via USB - there is OTG support.

The 3000 mAh battery is also smaller than last year's devices.

What else. Judging by indirect indications, there is no normal audio output. But there is support for the fifth Bluetooth, so if you suddenly want to listen to something from the reader, you can connect wireless headphones. There is no support for mobile Internet, but Wi-Fi is dual-band.

According to the updated data, the chipset is QualcommSnapdragon 636. 2017 release, about 140,000 points in AnTuTu. It's a bit old, but by the standards of e-ink devices, the performance is really higher, well, it just doesn't happen.