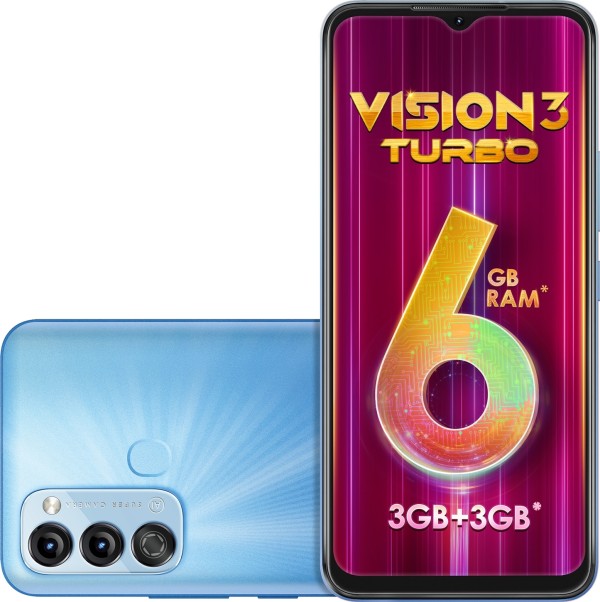 Magical, just magical. Pseudo-RAM penetrates deeper into the masses and is increasingly being used in device advertising.

Itel Vision 3 Turbo smartphone announced in Indiawhich is advertised as a smartphone with 6 GB of RAM. Here is the picture in front of you. True, there is some kind of small star on it ... And a postscript - 3 + 3 GB.

Do you understand the point?Caching technology has been invented for half a century. If you run out of fast (in this case, RAM) memory, then its individual pieces can be temporarily thrown into a slower (permanent) memory. By default, Android, when it runs out of RAM, simply kills entire applications. And if you switch to such a nailed application, it just starts over from the very beginning. If you have “extension” of RAM enabled, then the application will not be nailed, but unloaded into permanent memory. (I don’t know if the application is necessarily unloaded in its entirety. Or, perhaps, they can do it piece by piece? However, these are already details). What is the difference? In fact, she is serious. Roughly speaking, if you nailed the browser with an open page of the site, then when you restart the browser, it will first reload this page, and then process and render it. And when restoring from the cache, in fact, it will simply take the finished page image from there. And it's much faster.

So what's wrong with the Itel Vision 3 Turbo? It's like that.It's just a copy of the Itel Vision 3 smartphone announced six months earlier. (It is also sold in India, and even here, it has two varieties - 3 + 32 GB and 3 + 64 GB).

I see exactly two differences between Vision 3 and Vision 3 Turbo. He has a younger version of 3 + 32 GB and does not have a RAM expansion function.

Those. the guys took the older version of the old smartphone with three gigabytes of RAM, tweaked the software in it. And they released it for sale under the motto “And we have six gigabytes here.” Well done, right?

The antediluvian Unisoc SC9863A was left to work with the chipset (on average, about a hundred thousand points in AnTuTu, although sometimes more).

The battery is good, as much as 5000 mAh. And there is even a slightly accelerated charge - 18 watts. They promise a full charge time of two and a half hours.

We do not expect anything from the cameras. The front camera has a resolution of 5 MP. Rear dual - 8 MP main plus an unnamed auxiliary module. Most likely 0.08 MP.

There is a fingerprint scanner located on the back. There is no information about USB and Wi-Fi. I suspect both will be ancient. Micro-USB and Wi-Fi 4, respectively.