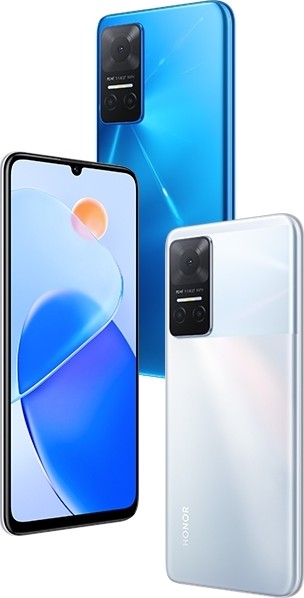 Honor today announced a pair of entry-level smartphones from the Play 6T series in its native China. The first one is called -
Honor Play 6T.
The second is his older brother
Honor Play 6T Pro.The devices are not too similar to each other, it makes no sense to compare them. Therefore, I will make a separate news for each of them. This news is about the youngest, about the Honor Play 6T (in Chinese, its name is written like this - 荣耀Play6T). The news about the second smartphone is here.

Honor Play 6T is very similar to the one announced inat the very end of 2021, in the same place in China, the Honor Play 30 Plus smartphone. The appearance is, however, different. But according to the characteristics - almost one to one. The only thing is that a macro camera has been added.

Honor Play 6T is a compromise smartphone and therefore curious. Especially for those who do not really need cameras in their smartphones.

Chipset - well known to everyonesuper popular MediaTek Dimensity 700. In AnTuTu we are waiting for 300-350 thousand points. Not flagship numbers, of course, but this chipset still quite pulls at a good average level.

The battery is good, 5000 mAh. Charging is fast, although not to the point of disgrace, like in modern flagships. But still, 22.5 W is very, very good.

The camera block looks stylish. But, in fact, there is only the simplest triple module 13 + 2 + 2 MP - the main camera, macro camera and depth sensor. The front camera is also one of the simplest - 5 MP.

In what bands of LTE and 5G our Honor can work is not reported. There is no NFC module. No, apparently, and a gyroscope. But there is Type-C, dual-band Wi-Fi and a side fingerprint scanner.