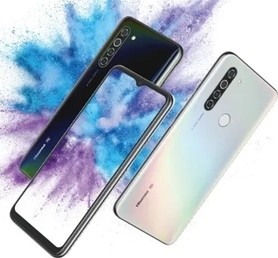 The Hisense F50 smartphone was formally presented in China in April this year. But as far as I can tell, I never made it to the shops.

Hisense F50 was interesting, first of all, itspreviously unknown chipset. A certain Unisoc Tiger T7510 with support for 5G networks. In terms of characteristics, it is close to MediaTek Helio P95, only Helio does not support fifth-generation networks. Those. theoretically, we expect performance in the region of two hundred thousand points in AnTuTu. (You will forgive me that I measure the productivity of these parrots. It hurts too much they are comfortable).

Hisense F50 +, oddly enough, is a somewhat simplified version of the Hisense F50. Moreover, the changes affected only the cameras. Everything else - hardware, memory, screen, battery - is exactly the same.

There is nothing to say about the chipset, by and large. No devices based on it have appeared over the past six months. If we start from the information about MediaTek Helio P95, it is a typical average from a relatively decent one. Junior middle class.

With memory, everything is fine. 6 GB of RAM, 128 GB of constant. There is support for memory cards, but the tray is hybrid.

It's not very clear with cameras. The main unit is triple (versus the quadruple in Hisense F50 - the wide-angle module was lost). There is a picture that indicates the resolution of the cameras is 16 + 2 + 2 MP (the main module, macro, the third is a depth sensor, probably). And there is a page with specifications, where the main module is written like this:

Auto translators translate these hieroglyphs as a word“Compatible”. And whether 48 MP is obtained by interpolation from 16 MP (which sounds crazy), or 16 MP is obtained from 48 MP (which is normal, why then indicate 16 MP as the main resolution?) And where did they also dig 13 MP from? All this is mysterious.

Intuition tells us that Hisense F50 + is unlikely to appear outside of China. But, perhaps, it will actually start selling there? At least we will learn more about "Tiger".