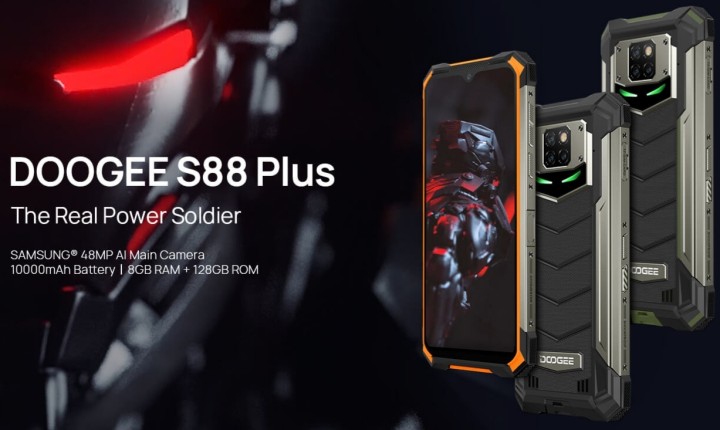 Doogee decided that last yearprotected smartphone Doogee S88 Pro was a success. And that it would be nice to update it. And the Doogee S88 Plus was born. Which, in essence, is exactly the same Doogee S88 Pro, only slightly better.

I managed to count exactly two changes.First, we added RAM. Was 6 GB, now 8 GB. Secondly, we changed the main photomodule. The resolution has grown from 21 to 48 MP. We will find out later whether the quality of the photos has grown.

So. Smartphone armored car with a smart battery.It is claimed that, like its predecessor, the Doogee S88 Plus can be dropped from a height of two meters. But only if on a smooth surface. If the surface is not smooth enough, then no more than one and a half meters.

Of course there is protection against water and dust. Both IP68 and even IP69K are promised. “Say goodbye to dust and sand with a diameter greater than 1 mm.” Immerse one meter, but not more than 24 hours. Or one and a half meters, but then for two hours.

The operating temperature range of the smartphone is from -55 ° to + 70 ° C. Those. he can go to Antarctica, but he cannot go to the bathhouse.

Officially confirmed information aboutdimensions and weight are not yet available. But with a probability of 99% they are exactly the same as in the Doogee S88 Pro. Those. 372 grams, 171.6 x 85.5 x 18.7 mm. Brick! Truly a brick!

It is a pity that we did not replace the chipset with moremodern. Left MediaTek Helio P70. Not the most recent (2018), average power (around 150,000 AnTuTu points). But there is a lot of memory. 8 GB of RAM, 128 GB of flash memory. There is support for memory cards, but the tray is hybrid.

16MP front camera, 48MP main rear camera. Plus there are wide-angle and portrait modules - 8 MP each.

There is an NFC module. There is a discrepancy about the Wi-Fi and LTE bands.

USB is modern, Type-C. There is no audio output, but the package includes a Type-C to 3.5 mm adapter.

Notable features include a multi-colored LED indicator under the camera block. And rightly so. A little color music will not hurt us.

The official announcement of the smartphone will take place on January 25. Perhaps, in honor of the start of sales, they will make some kind of discount. Or not.

Key features of Doogee S88 Plus: