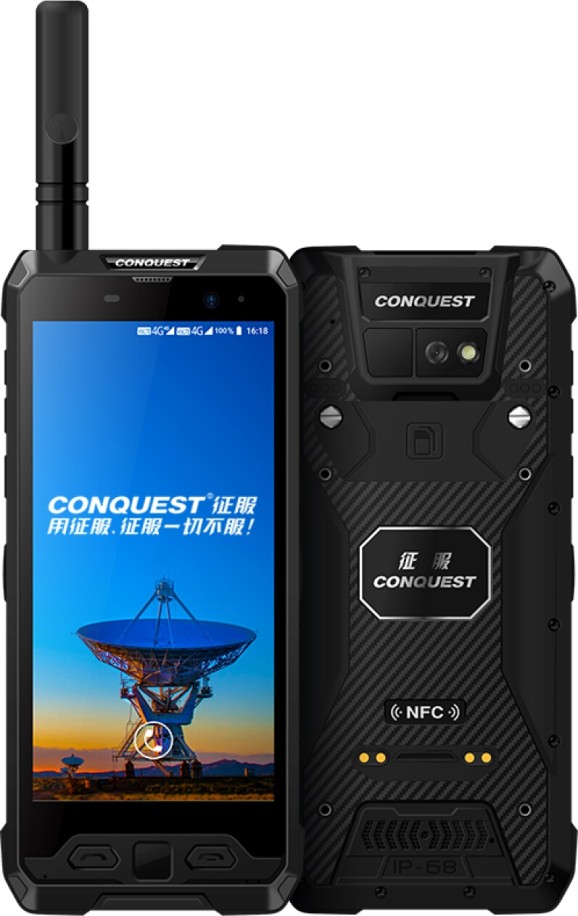 Mom told me - learn, son, Chinese ...listened. Deciphering a Chinese site consisting of only pictures is so-so entertainment. I would like to be sure that I understood everything correctly, but alas. I won't give a tooth.

Conquest specializes in highlyspecific devices. And the newly announced Conquest S19 is the pinnacle of this very specificity. As a smartphone - the modern basic level. Plus protection. And plus everything else. But this “everything else” means that everything they could have been crammed into the smartphone.

Apparently, the main difference fromthe predecessor to the Conquest S18 is a thermal imager. Although, even kill, I do not see him in the pictures. The back of the device looks exactly like its predecessor. Single hole for the camera plus a flash side by side. Or is it not a flash?

Satellite communication support. Apparently, like its predecessor, a specific Chinese one. It won't work with you.

Code scanner. Not with the help of a camera - separate, serious, like scanners of goods in stores - at the end of the device. And Conquest S19 can be a remote control. And really - why waste time on trifles?

Speaker - so let it be a Speaker with a capital letter. Well, very loud. Lantern? Using a camera flash is not our method. Let's put it separate and very bright.

What else? M6 connector for connecting specific peripherals. One of the pictures shows how a thing with an RJ-45 network connector is connected to the smartphone.

Walkie-Talkie (Push-To-Talk). There is even a separate button. Five kilometers of communication without any mobile and / or satellite networks.

Of course, a few words must be said about defense. Everything is standard here. Magic words about IP68 and MIL-STD-810. Shockproof, extreme temperature resistant, etc.

And finally, about the Conquest S19 as a smartphone.

The weak link is definitely the MediaTek Helio P35 chipset. Low-power - only about one hundred thousand AnTuTU points. Old.