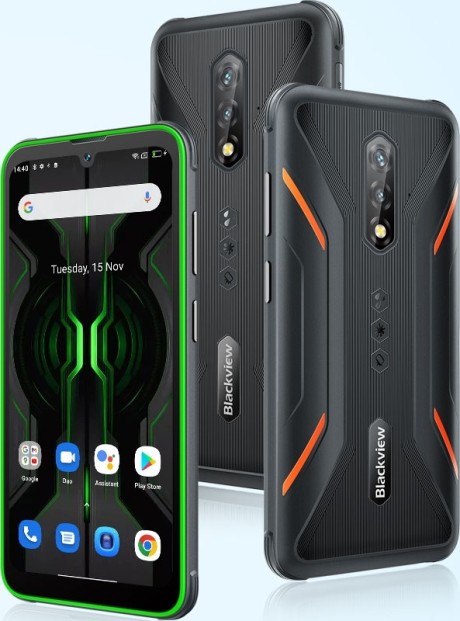 There has not yet been an official announcement of the Blackview BV5200 Pro smartphone, but it has already managed to light up in all details in the brand's brand store on AliExpress. So let's get acquainted.

Before us is a typical inexpensive smartphone armored car.We can assume that this is a planned development of the Blackview BV5200 smartphone presented in September. The same case, screen, battery. Added permanent memory, but replaced the chipset.

In order. With protection, everything is traditional.They promise IP68, IP69K and MIL-STD-810H. Translated into Russian, this means that the smartphone can be safely bathed in clean water. Well, it is also slightly protected from other minor troubles such as extreme temperatures. And you can even drop it a little.

That they changed the chipset is good.For the Helio A22 chip in the Blackview BV5200 is obscenely weak. However, the supplied MediaTek Helio G35 is also not God knows what. Slightly over a hundred thousand points in AnTuTu. But at least there are more cores - eight pieces instead of four.

Memory. A relatively good amount of RAM is 4 GB. The amount of permanent memory has grown from 32 to 64 GB. There is support for memory cards, but note that the tray here is hybrid.

Front camera resolution increased from 5 to 8MP. The rear camera looks double, but the manufacturer is suspiciously silent about the second eye. Looks like a prop. The main camera is made on the Sony IMX258 sensor already in 2015, so I would not expect much from it. Although, oddly enough, the manufacturer focuses on the camera. Like, everything is nice here, this and that, the fifth or tenth, and even the photo processing - from ArcSoft itself.

Other. There is an NFC module, but there does not seem to be a fingerprint scanner. Wi-Fi dual band. USB is correct - Type-C.

The Blackview BV5200 Pro will go on sale on December 5th.What will happen to the cost is still unclear. Now on AliExpress the price is $199.99 (₽13500). But I think it's too much. I suspect it will be lowered. Let's say a quarter?