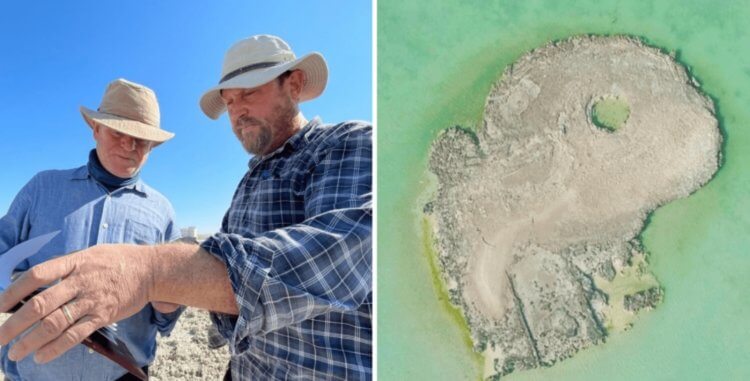 Bahrain is a large state in the Persianbay, which consists of more than 80 islands. Most of them are of natural origin, but there are also those that were created artificially. One of the islands is Al-Saya, in the middle of which there is a source of fresh water. In early January 2022, Professor Robert Carter and his colleagues began archaeological excavations on this small piece of land. Until now, it was believed that the island was created by nature, but the results of the excavations showed that representatives of the early Islamic era created it with their own hands. Approximately 1200 years ago, Al-Saya Island played the role of a station for providing people with drinking water. In particular, ancient pearl miners actively used the source. Archaeologists managed to figure out how the locals built an artificial piece of land.

Al-Saya Island turned out to be artificial and very ancient

Al-Saya Island is located off the coast of the cityMuharraq, which is considered the second largest in Bahrain. As a result of archaeological work that began in January, evidence was found that more than a thousand years ago this place played the role of an artificial source of fresh water. Arkeonews shared the details of the scientific discovery.

How were artificial islands created in antiquity?

To create an artificial island, the first stepthe locals built a reservoir and filled it with water that comes from the rocky seabed. A circle 20 meters wide subsequently formed around the reservoir - people had to move quite a lot of earth. Subsequently, by adding even more earth and sand, the width of the island increased to 40 meters. Also, on the southern and eastern sides of the island, straight platforms were built, from which a pier was formed.

Its structure hints at the artificial origin of the island.

Ultimately, the ancient inhabitants of the presentBahrain managed to create an island 60 meters long and 40 meters wide. According to researchers, due to its presence, a lot of pearls were mined in Bahrain at one time - this is hinted at by the abundance of pearl mollusk shells. The source of fresh water could be used for recreation by people who dived to great depths in search of pearls. They got to the island by boat, and the pier mentioned above served as the place of arrival.

The artificial island helped people to get pearls

At the moment, Al-Saya Island has noas large as before - part of the earth slowly went under water over time. Until now, it was believed that the state of Bahrain consists of 51 natural and 33 artificial islands. But now, the island of Al-Saya, which was considered natural, will clearly become artificial. Thanks to a new discovery, scientists now have at least some idea of ​​​​how artificial islands were created in antiquity. Only now it is not completely clear how the builders transported earth and sand. Boats must have been used for this. It is possible that people used bottom soil.

See also: Saudi Arabia is building a city on the water that does not harm nature

It is worth noting that the island of Al-Saya is far fromthe oldest artificial island. It is notable except for the fact that it is quite large in comparison with even more ancient artificial patches of land. The first man-made islands appeared in Scotland and Ireland around the 17th and 18th centuries. They were called crannogs and were used to protect against robbers - the houses placed on these platforms could only be reached through the bridge. For a long time, Ilene Donnell, who was built between 3650 and 2500 BC, was considered the oldest crannog in the world. However, in 2019, more ancient artificial islands were also found on Earth - I talked about them in this material.

Artificial islands are still being created today -perhaps even more often than before. The United Arab Emirates excels especially well in this business, where the amount of sand simply rolls over. The process of creating artificial patches of land today takes much less time and effort, because special vessels with a powerful pump are used to extract sand from coastal zones and shallows. Sometimes other materials are used to create artificial islands - for example, in the Indian Ocean they soon want to build an island from plastic garbage.

Approximate appearance of the island of plastic waste

You may know other interesting examples of artificial islands. If so, write in the comments - it will be interesting to read.