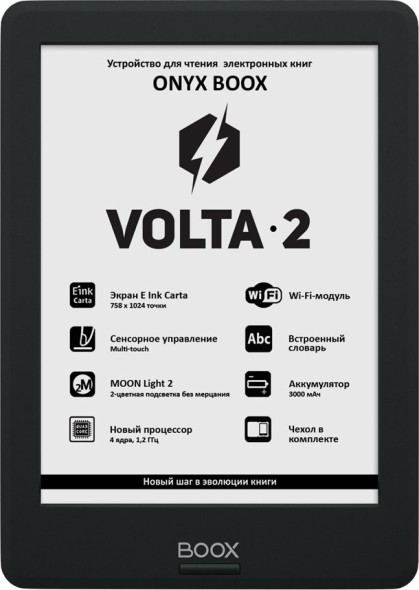 The case, however, is not simple, but with buttons forpaging. For the first time, if I am not mistaken, Onyx used it in the Onyx Boox Livingstone device. On the back of the reader there is a three-point connector. A similar connector on the case. Through it, in fact, the buttons work.

Curiously, the Onyx Boox Volta also has a similar connector on the back. But the cover must be purchased separately. And in Volta 2 everything is in one bottle.

Picture with case for Volta 2 in Onyx for nowWe didn't have time to draw, so keep Livingstone as an illustration. Outwardly, the readers are the same, differ only in iron characteristics. If you look closely, the buttons are really visible from the very right edge of the case.

Briefly about the device. If we digress from the cover, then we have a classic middle-class reader.

The body is plastic. No premium metal.

The control button on the device itself is onlyone under the screen. This is "Back" (it is additionally responsible for turning on the backlight). The rest of the control is either through the touch screen, or through additional buttons on the case.

Iron. Officially, the brand of the chipset has not been announced, but, most likely, the good old Rockchip RK3128 chip (born in 2014) is used. There is not much RAM - 512 MB. Flash drive standard, 8 GB. Plus there is support for memory cards.

The battery is capacious, 3000 mAh. There is a Wi-Fi module.